I think I may have set a new record for myself in spinning up a new skein of yarn. I started on Tuesday, had three bobbins of singles on Wednesday, and had a plied skein on Thursday. It's dark and moody and I surprised myself by loving it, because I wasn't hugely in love with the fiber. This was December's shipment from the Southern Cross Fibre club, a colorway called Midnight Garden on Falkland. For reference, this was the original fiber: 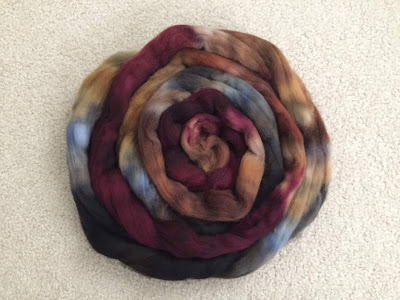 I split the fiber into thirds by folding it into three more-or-less equal pieces and pulling it apart at the folds. Then I tried to maximize the color mixing by using those tear points to determine the order of spinning of each segment. In other words, if I tore the fiber apart at a red section, I made sure that one piece of the fiber started with that red and the other piece ended at the red. I think I was pretty successful; there's a lot of spots in the finished skein where each ply is a different color. 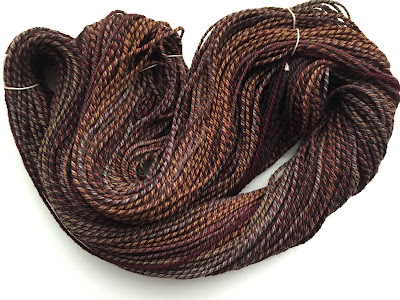 The finished yarn is in the DK/worsted range and approximately 158 yards. That's of course lower yardage than you'd expect for the amount of fiber compared to a commercial yarn, but that's because I spun it worsted, thereby condensing the fiber a lot. That makes it harder wearing, but also means that the fiber doesn't go as far. Still, I'm very pleased with this skein because it is more consistent, so it seems I am getting better at spinning thicker yarns.

For my next spin, I decided to go with something completely different. I pulled out these beautiful batts that I bought from Liz of Hobbledehoy at SSK in 2017. They're a lovely, soft blend of organic Polwarth, bamboo, yak, silk, and some sparkle. Liz labeled them "Nightmare" batts, but really they're anything but. 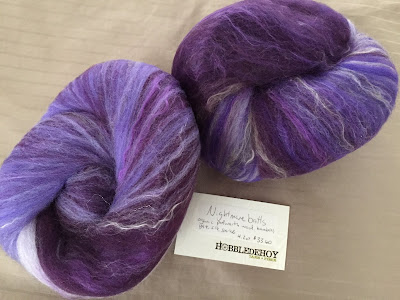 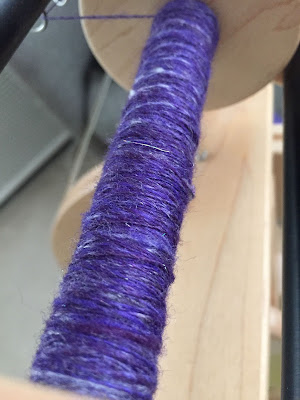 If you're not a spinner, the easy way of explaining this is that in a woolen prep, the fibers are going every which way, and when you spin them woolen, you preserve that fluffiness. You can probably see a difference between this and my usual bobbin shots. The singles are much more matte and fuzzy in appearance. But they're also a heck of a lot faster to spin, so I'm hoping this project will progress rather quickly. When I do finish it, I have a strong suspicion that a certain 10-year-old will want to steal it for herself.

The weekend has been a fairly good one, though as usual it's gone much too quickly. This evening we're meeting our neighbors for our weekly toast and checking in on everyone (we usually do it Friday but postponed it this weekend due to rain). Then Rainbow and I are going to use one of the frozen pie crusts in our freezer to make an apple galette for dessert tonight, and this evening I'm planning on curling up with my granny square blanket and my knitting to watch Call the Midwife. I went for a 4.1-mile run this morning and I'm pooped! I hope you're all well and that your weekend brought some relaxation and a good rest from the normal stress of the week.
Posted by Sarah at 5:10 PM