My Mission: Do Not Unravel

I have a history of depression and anxiety, and giving my natural tendencies, the current state of the world would normally be something that would push me over the edge. I am really thankful right now that I have coping strategies I've learned from therapy and that I've been taking medication to help take the edge off. Even so, I'm sure that I'm not alone in feeling more anxious and sad than usual. I know that if I don't take an active role in combating those feelings that they will overtake me, and that's not an option right now. So I am choosing to focus on taking steps to ensure that I stay healthy -- both physically and mentally -- and to focus on the good things that are still there.

In yesterday's post, I talked about things that are bringing me joy. Even though I've found it something of a challenge to knit, my stash still brings me a lot of joy, and I've had a little bit of enhancement over the past week that's been extra joyful. 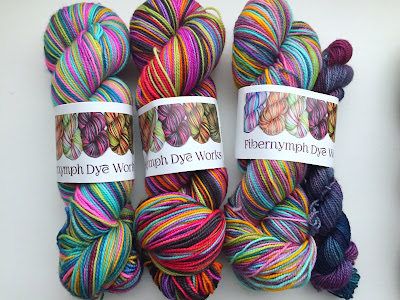 As you can see, these are all from Fibernymph Dye Works, which I suspect will surprise exactly none of you. Lisa is a dear friend who happens to dye yarn that I love working with, so I am always happy to buy yarn from her (not least because she lives close enough to me that shipments from her generally make it to me in one day). I actually only purchased one of these skeins, the one on the far left, which arrived yesterday and is her special ninth anniversary colorway. The other two skeins were prizes from last year's Monthly Makes programs.

Reading is generally a good way for me to get out of my head, and though it's been harder to focus on what I'm reading lately, I'm still managing a little. I finished the next Read with Us book, I Am Not Your Perfect Mexican Daughter, on Monday. I didn't really love it and in fact found it rather sad, but perhaps I'll appreciate it more once we start discussing it as a group. I turned next to something comforting, inspired by Katie, and decided to listen to the audiobook of Anne of Green Gables. I've read it before, of course, but it's been a while, and as last week I binged my way through the newest season of Anne with an E on Netflix, I've been wanting to escape to Anne's world again. It's been an absolute delight. Last night I also started one of the freebies I had in my Kindle library because I wanted to read something for a few minutes before bed, so I picked In an Instant at random. I've only read one chapter so far but it seems like it's only going to be so-so.

Exercise is always a good idea (gotta love those endorphins!), and it actually feels a bit like a treat now that it's one of the few reasons why we can legitimately leave the house. I've been trying to take a long walk every day, at least when the weather permits, but yesterday I realized that it was going to be the first day of April today, and April is typically when I start running again -- and then I had a somewhat crazy thought. I have no desire to run an entire marathon, and the Pittsburgh Marathon has already been canceled for this year in any case, but a fun challenge to myself might be to run enough miles to add up to the equivalent of a marathon by the time the Pittsburgh Marathon would have been held (that's Sunday, May 3). So today I slept in a bit and skipped my morning shower, and later today I'll be heading out for my first run of the season. I'm putting this out there publicly so I can be held accountable to more than just myself!

Finally, one additional strategy to ward off the feelings of helplessness that so often accompany depression and anxiety is to do something useful and productive. I love to bake and have often wanted to learn to bake bread, but yeast has been sold out at the supermarket. So what's an aspiring baker to do? Start a sourdough starter! I started the process on Monday and wasn't feeling too optimistic, but this is what I discovered when I went downstairs this morning: 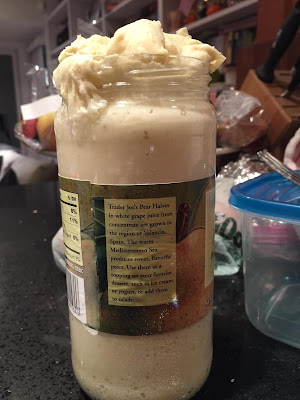 Houston, we have fermentation! Clearly this jar was not big enough, so my starter has been transferred to another container. I've still got several days until I'm ready to make bread, but I'm happy to see that things are moving in the right direction.
Posted by Sarah at 9:44 AM