Three More Bobbins and Other Signs of Progress

I'm once again joining up with Carole and friends this Thursday with three project updates.

First, though, I want to thank all of you who offered sympathy, commiseration, and advice about the lice debacle. I think we've finally got a handle on the laundry at this point, and Rainbow and I have been settling into a daily routine where in the late afternoon, once she's finished with school for the day and had a chance to relax a bit, we comb through her hair and then she takes a shower. Yesterday I saw only three nits and she reported that her head was much less itchy, so I think we're headed in the right direction. We'll continue to be vigilant and inspect her head daily, but I'm no longer freaking out about it. The Mister and I also seem to have avoided catching them from her, though I haven't managed to avoid the psychosomatic itchiness that comes with the mere suggestion of lice.

I am continuing to find it difficult to focus on any one particular project, but I do seem to be making some progress as I flit between them. Spinning seems to be the easiest at the moment, and after starting a new project on Tuesday, yesterday I somehow found myself with another three finished bobbins of singles. 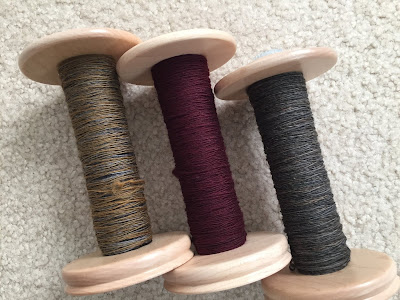 As with the last spin, I'm doing a traditional three ply that I expect will come out in the DK to worsted range. This is another Southern Cross Fibre club shipment, last December's Midnight Garden colorway on Falkland. Though I simply split the fiber into thirds, I did a little more color planning this time around and made sure that each section started and ended with a different color so that the colors would be fairly mixed up in the plying. I'm planning to ply as soon as I post this, so we'll see how it works out.

I've also been continuing to work on Rainbow's crochet blanket as part of The 100 Day Project, and though I'm not quite back to where I was when I ripped back, I'm getting very close. Yesterday I finished up the center block and joined in the second skein of yarn again. 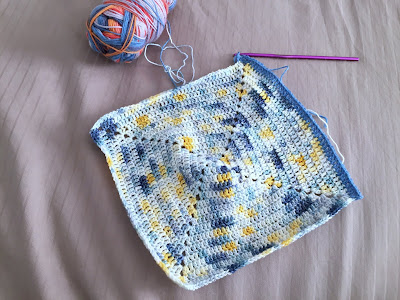 Nearly all my knitting time has been on the Newborn Vertebrae, which is almost done. Good thing, too, because the friend I'm knitting it for was supposed to be induced yesterday, so there will be a baby who needs it very soon.


I worked on the ribbing around the collar and fronts yesterday while reading The Ten Thousand Doors of January, which I am just loving. I'm about a third of the way through it now and am simultaneously trying to speed through it (because my next hold is coming soon) and savor every word. It's really beautifully written and reminds me a lot of Erin Morgenstern's books.

I'm looking forward to another weekend, though of course we don't have any big plans. I'm hoping to try my hand at sewing some face masks, and Rainbow and I are getting very close to finishing up the 2,000-piece puzzle we've been working on for the past several weeks. I'm also thinking about doing some baking, perhaps some brownies or a galette, seeing as we have ingredients for both on hand (thanks to my mother for the latter; the last time we had dinner with my parents, she gave me a package of frozen pie crusts).

I hope you also have something nice to look forward to this weekend and that the rest of the week goes smoothly!
Posted by Sarah at 9:09 AM