A Yarn and Book Update

I'm linking up today with Kat and the Unravelers and sharing an update on what I've been reading (you already know from yesterday's post what I've been knitting).

First, a yarn update -- my skein finally arrived yesterday afternoon, after taking what I've roughly calculated to be a 600-mile sightseeing trip around the state. Here it is with the mini skeins I've opened so far (today's mini is at the far right): 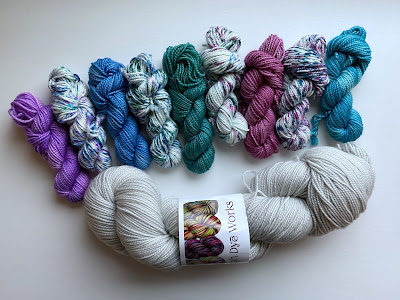 My reading hasn't been as prolific as it has at some points this year, but I've finished two books in the past week:

I got a bit surprised by a library hold coming up on Glass Houses -- I wasn't expecting it for another week or so! -- but that's not to say I wasn't delighted. I have yet to be disappointed by a book in this series, and I'm getting very close to getting caught up, which both excites and dismays me (I both want to read them all and don't want to get caught up because that will mean having to wait for the next one to be written and published). I felt rather smug about figuring out a key part of the mystery in this one; it means I'm either getting smarter or Louise Penny has lost a step somewhere. Either way, it was a good read, and there was still a good twist at the end that I didn't see coming to keep me entertained. I gave it 4 stars.

I'd put This Tender Land on hold at the library quite a while ago after reading and really enjoying his Ordinary Grace earlier in the summer. This book is set roughly in the same area but about 20 years earlier, at the height of the Great Depression. It follows four children, all orphans, as they run away from a bad situation and try to find a new home. Along the way, they get very real glimpses of the darker side of humanity and of the suffering caused by poverty, alcoholism, and greed. I've described it in my Goodreads review as a combination of The Adventures of Huckleberry Finn, The Grapes of Wrath, and The Odyssey. I enjoyed it, though not as much as I enjoyed Ordinary Grace; I think it was a little longer than it needed to be. I gave it 4 stars as well.

I have now read 98 books this year, and I'm feeling very confident that I will hit the 100 mark! I'm not really sure what I'm going to read next, but I certainly have a lot of options. I feel like I should be virtuous and read something I already have rather than exploring what's available at the library, but all reading is good, if you ask me, so no promises!