The Thrill of the Mystery

Hello, friends! I hope you all had an enjoyable Christmas and Boxing Day. We woke up to a white Christmas -- the snowiest Christmas in Pittsburgh in 85 years, apparently! We officially got 7 inches total for the entire snow event, followed by some frigid temperatures, so the roads were in terrible shape for a couple of days (or so I heard from the Mister -- I wasn't going anywhere!). Today, though, the sun was out and things were starting to melt.

Our Christmas was lovely, despite the fact that we did not spend it in Florida as we usually do. Usually we'd be going to the movies and getting Chinese takeout (the typical Jewish Christmas), but we decided that we were going to cook as long as we were home and had the time. We started the day with homemade cinnamon rolls (I used this recipe), which we'd prepped the night before, but I got up early to get them out of the fridge and let them rise. They were spectacular -- and I got to enjoy watching the snow while I had a cup of tea while I waited. For dinner, we made a pot roast, thanks to the Mister's being willing to brave the roads and the kosher supermarket still being open; the piece of meat we'd previously bought did not look good, so we decided not to risk it. And thanks to my sister-in-law, the family's amazing baker, we had a tin of Christmas cookies to enjoy for dessert.

I've done a fair bit of knitting this vacation, but because it's Sunday, let's talk about the spinning! I started opening up my HipStrings Base 12 fiber and spinning it a bundle at a time. I've been taking a photo of each bag's contents as I open it so I can document the process. I have opened six bags so far: 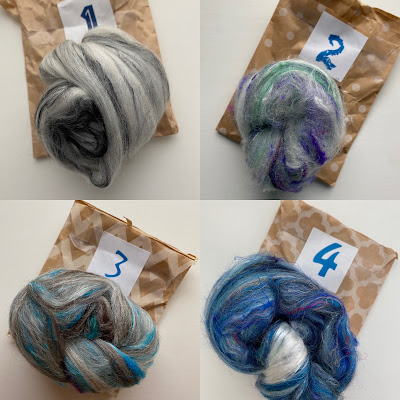 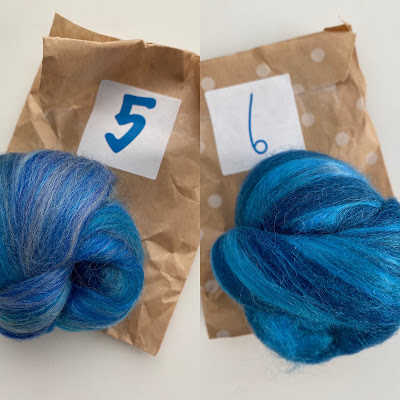 For the first four bundles, at least, the fiber seemed to start out smooth and get increasingly textured with things like sari silk. Starting with day five, things got smooth again. There's an envelope in the package that says what in each bag, but I decided to wait to open it until I'm done spinning so I don't ruin the surprise. 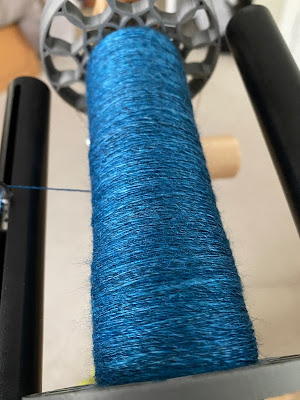 I have been spinning each fiber selection in order and plan to chain-ply all the singles when I'm done. I know the skein will be very textured in some spots and certainly uneven, but I think that will make for an interesting yarn and an interesting project when knit up. I'm hoping to be able to finish the rest of the singles in the next several days so I can ply it before the end of the year. It would be a good way to say good-bye to 2020!