It's going to be hard to finish all three of my 20 in 2020 lists (yarn, patterns, and fiber), but one of them is officially complete as of yesterday. I finished spinning the singles on Friday, let them rest on the bobbin overnight, and then wound them off into a center-pull ball yesterday morning so I could ply from both ends, which I managed to do in one sitting yesterday. 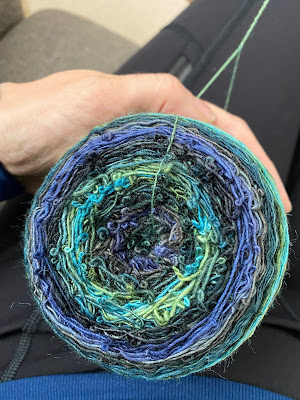 I wanted to skein and wash last night, but we had a late evening -- we decided to watch You've Got Mail, which I've been quoting to Rainbow for years ("F-O-X!"). She now finally gets my references and also has been properly educated about the early days of email, but it meant that it was almost 10 by the time we finished. So I skeined and washed this morning, which means that I don't have final final photos to share -- it's still a bit damp and is hanging out on the radiator to dry out. But it's still pretty nice yarn, if I do say so myself. 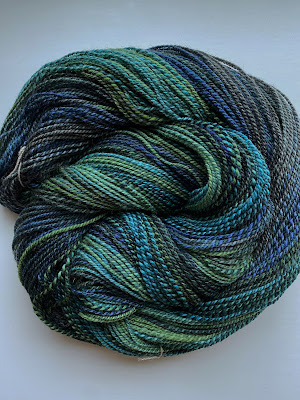 I won't be able to determine the final yardage until it's fully dry, because handspun skeins often shrink when they dry, but it looks like it will end up sport weight and likely the in the neighborhood of 300 yards. 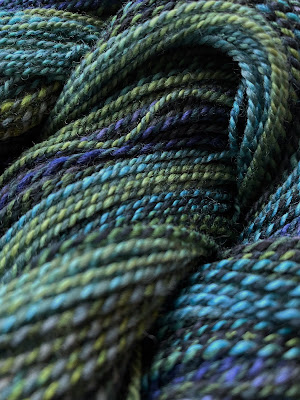 I really struggled to capture the colors accurately in these photos, and ultimately I had to edit them a bit because the colors were appearing so washed out when in fact they're actually quite deep and moody.

I was pondering what to spin next and was considering several options -- and then I remembered I still have an Advent-ish fiber thing to spin! So when I next sit down at my wheel, I'll be digging into my HipStrings Base 12 fiber. Can't wait to see what's inside those brown bags!