In Which I Likely Overcommit Myself

I was feeling really good about my holiday knitting yesterday. Rainbow wanted company yesterday afternoon while she worked on one of the big Lego sets she received as a gift last week, so I brought my knitting down to the family room and worked on my father-in-law's socks. A couple of hours later, I had a finished pair: 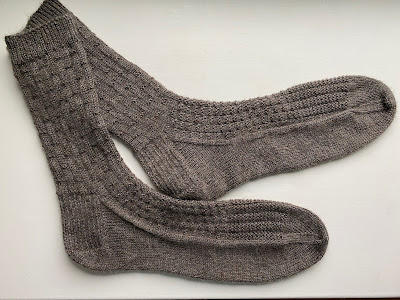 Though I complained a number of times about how long these socks were taking, in reality they didn't take all that long. Part of that was because I was using size 1 needles instead of my usual size 0 (the larger size was called for in the pattern, but I also figured it was a smart move on my part to move these along). The stitch pattern was also very engaging, and once I more or less had it memorized and didn't have to keep track of where I was in the pattern, it moved along even more quickly. I very wisely made notes in the pattern when I was knitting the first sock of how many repeats I did of each section so I didn't have to measure constantly for the second sock.

The only modification I made was to do a more typical slip-stitch heel flap instead of the patterned heel flap called for in the pattern. The patterning looks interesting, but I don't think it will wear as well as the reinforced flap; having seen my father-in-law's feet, I know he needs that reinforcement.

When these socks were finished, my holiday knitting should have been done. But no -- in typically crazy knitter fashion, I decided to try to knit one more last minute in the form of a hat for my brother-in-law, the only family member I didn't have a gift for. 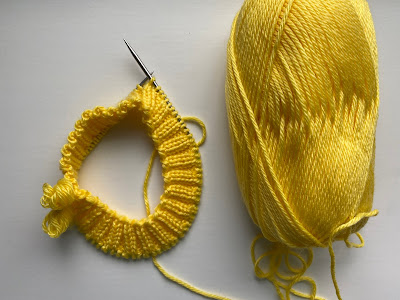 He and Rainbow have this ongoing joke about corn (it's a long story), and as I had this bright yellow skein of Knit Picks Mighty Stitch from my last order just sitting there, I figured I'd freestyle a corn hat for him. I only just cast on last night and so only got some of the brim ribbing done, but I'll be focusing on it today to see how much I can get done. It's worsted weight and a simple knit/purl stitch, so in theory it shouldn't take too long. Rainbow is also working on finishing up a hat for her cousin, so we will plan to drop the hats and the socks I knit for my sister-in-law later in the week (they live nearby, so we can always drive over and do a no-contact porch drop).

Lest you think I'm winding down my knitting plans for the year, here are three skeins of handspun I've pulled for projects I'd still like to knit before the end of 2020: 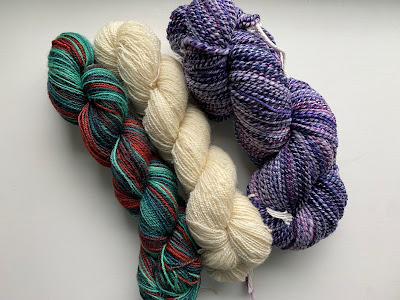 The green and red skein on the far left is on my yarn list for 20 in 2020, and I've decided to pair it with the natural cream in the center for a Bousta Beanie for me. The larger purple skein on the far right is destined to become Entrechat (Ravelry link) for a baby gift for a friend who is scheduled for a C-section next week, I believe. The latter project, at least, should be pretty fast, as I'm planning to knit the smallest size (and it's worsted weight on size 8 needles!). In addition to all this, I'm also spinning my HipStrings Base 12 fiber. I am nothing if not ambitious, but we'll see if I've bitten off more than I can chew!