WIPs and Reads and Minis, Oh My!

It's (already!) Wednesday (I love it when the second day of my work week is already the middle of the week!), and I'm joining up with Kat and the Unravelers today to talk about what I'm knitting and reading.

At the moment, my knitting is completely focused on holiday gifts. I am sorry to say that I am still in the middle of the first sock of the pair for my father. I swear this sock is knitting up slower than any sock I've knit before! At least I am through the gusset and somewhere in the middle of the foot, but I still have at least a couple of inches to go before I start decreasing for the toe. I never thought I would look forward to meetings, but right now I'd happily take some because it would mean dedicated sock knitting time. 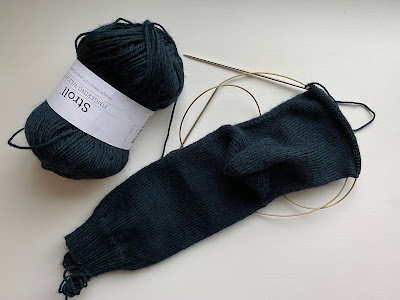 One of the complications of having Rainbow home is that I can no longer work on holiday knitting for her during the day, and now that she's older, she's also going to bed later, so I am getting maybe an hour of knitting time a night. For the past week, I've been working on a pair of Fantastical Fox Mitts (Ravelry link) for her, and I'm only now approaching the end of the first one -- just the rest of the thumb and the fox's "nose" (on the flap) to go! 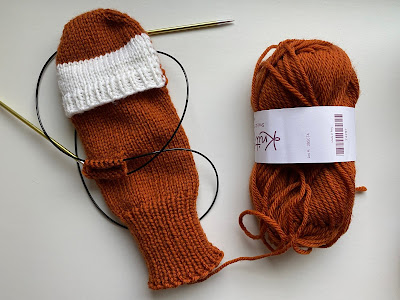 These have been a fun little challenge because the white on the flap is done using intarsia in the round, which I've never done before. It's actually a lot easier than I thought, just a bit fiddly because of how my stitches were arranged on the needles. Chanukah starts a week from tomorrow, so if I can keep up the current pace, I'll have the pair finished in time, even if these have to wait to be opened the last night.

One unexpected delight yesterday was remembering that on December 1 I could start opening up my holiday minis! I ordered what is essentially a yarn Advent calendar from Fibernymph Dye Works, as I have for several years (though in years past I opted for the fiber version), and once again Lisa designed the colors to blend into each other as you go through all 24 packages. Here are the minis from yesterday and today: 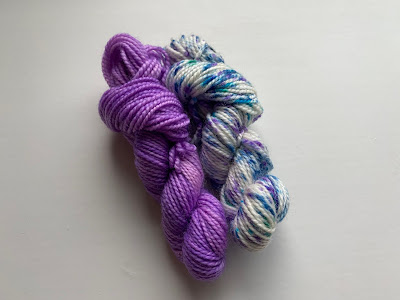 I have decided to use mine to knit an ADVENTuresome Wrap (Ravelry link), but just yesterday I realized that in addition to the minis, I'd also need one full skein of yarn. Lisa to the rescue (it's nice to have indie dyers who are friends!) -- I texted her asking about what color would work best so I could place an order with her, and she responded that she happened to have a spare skein in a pale gray semisolid that she'd pop in the mail to me. I'm not going to get started on my wrap until the holiday knitting is done or nearly done, so I told her there was no rush, but mail usually takes about a day to get from her house to mine, so I expect it'll be here soon.

In reading, I have finished only one book in the past week (I told you I didn't have much time last week!), but it was a good one.

I know from looking at Goodreads that a lot of you have already read and enjoyed The Great Believers, so I know I don't need to post a review to convince you to do so. I actually bought the Kindle book months ago, sometime in the summer (I actually remember doing it on my cell phone standing in our synagogue's parking lot, where we met up with my family so they could see Rainbow riding her bike), when it was a daily deal. I'd heard it was really good but honestly didn't know much about it, and I finally got around to reading it when I had a break between library holds. It's an extremely well written and heartbreaking story centered around the AIDS crisis of the '80s in Chicago. In many ways, it reads like a memoir. Highly recommend -- 4 stars from me.


I'm currently reading and trying to finish Glass Houses, the 13th book in the Gamache series -- I'm getting closer to catching up! I have about 100 pages left to go and think I've already figured out a key part of this mystery, but we'll see if I'm right. I've got about three weeks (or so my app tells me) until my next library hold comes up, so I'll be digging into one of the many books in my Kindle library next (or maybe -- gasp! -- I'll even read a real, physical book!).

I'd love to hear about what you've been knitting and reading these days in the comments!