The last day of 2020 has finally arrived, and I am more than ready to see the year go. But before it does, it's time for my annual look back on my year in making.

According to my Ravelry projects page, I completed 39 knit and crochet projects this year, using up more than 15,000 yards of yarn. I think I've actually used more than that, because according to my KnitMeter counter, I've actually used more than 19,000 yards. (The discrepancy is likely due to my own inconsistent tagging in Ravelry). Those projects included two crocheted blankets, four sweaters for me, 12 pairs of socks, 10 hats, three shawls, and various other projects.

I've also done quite a lot of spinning this year, prioritizing spinning my "back catalog" of fiber club shipments. According to my rough calculations, I converted almost 160 oz. -- that's almost 10 pounds! -- of fiber into yarn. That includes a fleece as well.

I have some plans for the year ahead, but because it's Thursday and Carole is hosting her final Three on Thursday link-up for the year, here are three things I want to finish before the year is out:

1. My mittens
In order to finish off my patterns 20 in 2020 list for the year, I need to finish this two pairs of mittens. I knit up the first pair earlier in the week, and now I've got just a thumb on the first mitten and the second mitten to knit. That might seem like a lot of knitting for one day, but the hands on these mittens (which are later felted) are knit at a very loose gauge and knit up very quickly. Pretty much the whole hand above the thumb on this first mitten was knit in about an hour last night. 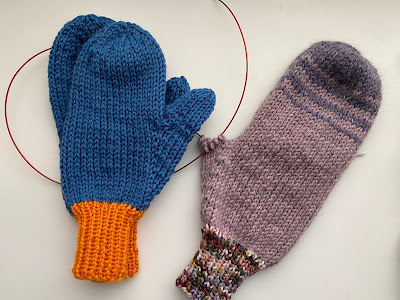 2. My Base 12 singles
I really tried to get this done yesterday, but I accidentally nodded off in the middle. Oops. I have a bit of what's currently being spun and the last little bit of fiber left to do. I realized that it was unrealistic to expect to finish the skein before the end of the year, so instead this will be my first finished skein of 2021. 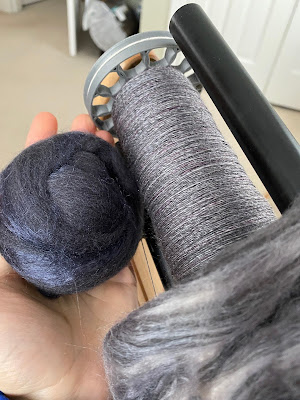 3. My book
I'm nearly finished with a silly Amazon First Reads book that I started earlier in the week. It's not very good, so I really don't want it to be my first finished book of the new year. I have like an hour and 20 minutes left to read, so I figure I can handle that while I'm knitting or spinning -- multitasking for the win!

I hope that in spite of everything the year has thrown at us, you've accomplished something you're proud of, and I'd love to hear what you're planning to cast on first for the new year! For me, it will likely be a Bousta Beanie in my handspun.

Wishing you a happy, healthy, VACCINATED new year and a year full of wool!

Email ThisBlogThis!Share to TwitterShare to FacebookShare to Pinterest
Labels: 20in2020, Reflection, Three on Thursday