Where the Time Has Gone

Several of you took me to task for the title of my last post. I think you all know by now that I'm not at all the type of person who slacks off from their responsibilities, but one of the downsides to having my home "office" in my bedroom and to be working from the chair where I normally sit to spin is that I see my wheel all the time and thus feel guilty when I'm not giving it attention.

The truth of the matter is that the reason I haven't been spinning as much lately is because most of my craft time has been occupied with knitting! I have three knitted gifts left to finish, and I'm not too concerned about meeting my deadlines, but I am also anxious to finish all of them so I can move on to new things for me. The top priority is the socks for my father, which seem to have some sort of black hole in them because they feel like they are taking much longer than a plain pair of socks should take. 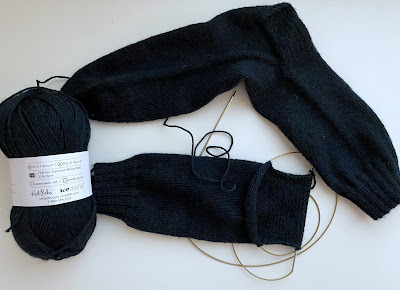 I've actually even done a bit more since I snapped this photo this morning; the second sock now has a completed heel and I've started on the gusset decreases. Ideally I'll get this second sock finished in the next several days so that I can block them and then package them up with my mother's socks and some other things to send to my parents this weekend. The mail has been all sorts of crazy lately, and Chanukah starts Thursday night, so it would be nice if they could get their socks before the end of it. These socks should be perfect for knitting while doing other things, but the dark yarn does make things a bit tricky, especially because the yarn is a little splitty with my very sharp Addi Sock Rockets. I think part of the reason they're taking so long is because I'm getting 14 rounds per inch and I'm used to getting somewhere between 10 and 12 rounds per inch. I suppose this yarn is thinner than what I'm used to using for socks (it's 460 yards per 100 g rather than 400 yards per 100 g), but that still surprised me. I'm thankful that for my father-in-law's socks, I have a bit more time (I just have to get them done before Christmas, and we'll be delivering gifts in person).

Meanwhile, I've been madly knitting for about an hour each evening after we finally get Rainbow in bed to try to get her fox mittens finished in time. As I suspected, the second has gone much faster now that I know what I'm doing. 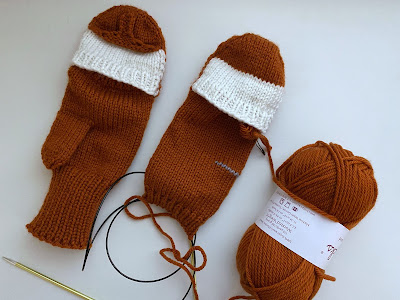 I expect I'll be able to at least finish the cuff of the second mitten tonight and maybe even start on the thumb. Not shown here are the four ears, which are all knit and will just have to be sewn on. The "face" of the completed mitten on the left is done as well, though it's flipping up right now, making it hard to see. It'll be sewn into place with a button. I was starting to think that I wouldn't have enough secret knitting time to get these done, but after what I got done this weekend, I'm feeling more confident. I think two to three more evenings on these should be sufficient to finish them.

One of the things I'm excited to move on to after the holiday knitting is done is a wrap using my Fibernymph Dye Works holiday mini skeins. Here are the first eight of them, enough to see the pattern that's forming: 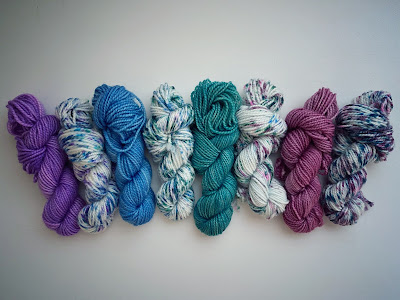 They alternate between a semisolid and a white with speckles, with the speckles done in the colors of the semisolids on either side. That means I get a little hint of what the next semisolid will be when I open up a speckled skein, but even so I'm really enjoying the process of opening a little gift to myself each morning, even if it isn't a complete surprise. My plan is to use all the minis along with a full skein of fingering in an ADVENTuresome Wrap (Ravelry link). Lisa sent me the skein of pale gray last Friday, and I thought I'd have it Saturday or at the latest yesterday, because we live close enough that it generally takes a day for the mail to get from one of us to the other. Remember what I said about the mail being crazy? When the yarn didn't show up yesterday, I checked the tracking on it, and apparently it decided to go on a tour of the middle of Pennsylvania. Lisa lives in the mountain southeast of me. The yarn went from her to the local sorting warehouse in Warrendale, which is northwest of me. From there it went to Harrisburg (our state capital, about 2/3 of the state east of me) and then to Lancaster (even further east). Then it came back to Warrendale, and as of this morning, it's supposedly out for delivery -- though I'll only believe that when I actually have it in my hands. Is it any wonder that people didn't want to trust their ballots to the postal service?