I had such fun sharing three happy-making things last week that I thought I'd do it again for Three on Thursday (hosted by Carole) this week!

I've been complaining for a while about how long my father's gift socks have been taking to knit. I know it hasn't been that long in the grand scheme of things and in comparison to slower knitters, but I am usually really fast with stockinette socks. Thankfully the planets aligned yesterday and I was able to devote most of the day to working on them -- and last night I finished them! I gave them a quick soak and laid them on a towel on top of the radiator to dry (one of many reasons I like having radiant heat in our house), so by this morning they were ready to go! 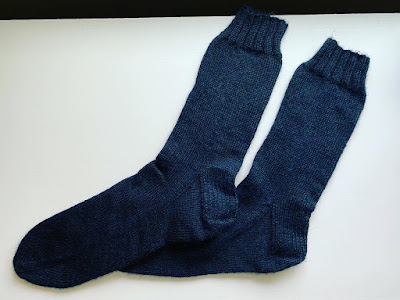 I've got just one more pair of socks to go, but I'm going to be knitting those on larger needles and hoping that results in a faster project!

Happy Thing 2: A Surprise Treat in the Mail

I am not and have never been a morning person, so I'm generally a little grumpy when I first wake up, even with the extra half hour of sleep I've been getting since my commute to work changed to walking up a flight of stairs. This morning I got a nice surprise to start my day that instantly improved my mood: an email that someone had sent us something from Zingerman's! If you've never heard of the magical deli, well, just click over and look through their menu. I've never had anything there/from there that wasn't delicious, and I can't wait to see what's in store for us! I have no idea who has sent this gift or what it is, but we'll find out when it arrives tomorrow, and I have no doubt that it'll be delicious!

Chanukah is technically a minor Jewish holiday, but it's been blown up to be the equivalent of Christmas over the years (in the United States, anyway). Traditionally it's not about the presents, and children would receive gifts of gelt, or money, rather than gifts. But now it's about the gifts, and we've got a bunch of things for Rainbow (that I really need to wrap today, oy vey!). I had a brief moment of panic this morning when I didn't know if we had any candles in the house -- because I know we didn't buy any this year, and last year we were in Florida for all of the holiday -- but I did a quick dig and breathed a sigh of relief:

I don't know that we have enough to get us through the entire holiday, but it's enough for at least a few nights, and we can get more this weekend at the supermarket. The fortunate thing is that we only need two candles to start, so I'm sure we could have scrounged up a couple of random candles if we'd needed to.

*And now for a little Jewish education session! One of you asked me a few weeks ago what the correct spelling of the holiday is. The answer is that there isn't one, at least in English. The word in Hebrew looks like this (with transliteration -- if you go to this site, you can hear it pronounced):

It's a three-syllable word, and because the Hebrew letters don't have a direct equivalent in English (there are multiple Hebrew letters that make the same sound, for instance, and some like the middle letter here that in this case only make the sound of the vowel -- the dot in the middle next to it), any English spelling is just an approximation of the sounds. I usually write it as Chanukah because it seems closest to how it's actually pronounced, but there are so many variations -- and really it doesn't matter. So spell it any way you like and don't stress! And if you want to observe the holiday in some way, it's traditional to eat foods fried in oil (to represent the oil that should have lasted for one day but lasted eight instead), like potato latkes and doughnuts. Yum!