All the Way to Eleven

It's a special day in our house. Today, this young lady is 11 years old!

Obviously this birthday will be unlike any other, with a Zoom birthday party, but we're trying our best to make it as special as possible! And I've already promised that as soon as it's safe, she can invite as many people as she likes to a make-up party. For now, we'll have a quieter celebration at home with just the three of us. She'll have the dinner she chose (steak and green beans, with brownies and ice cream for dessert) and will get to open birthday as well as Chanukah presents tonight. It's not fancy, but it'll have to do.

Seeing as she's the star of the day, it seems appropriate the the FO I have to share today was knit for her: 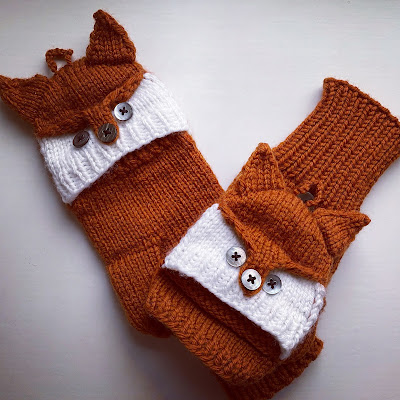 These were a fun knit and would have been pretty fast to finish had it not been for the fact that I had to knit them in secret, meaning I got maybe an hour a day to work on them in the time between when Rainbow went to bed each night and when it was bedtime for me. I think because of that constant starting and stopping, they actually took more time, in total hours, than they would have if I'd been able to sit down and focus on them exclusively for a day or so.

While this pattern is very well written and certainly very clever in its construction, I will warn you that it's very fiddly and has a lot of parts. You start with the mitten flap, which is worked top down and uses intarsia in the round (which is actually much easier than you might think). Next you work the fingerless mitt from the top down, joining the flap once you've worked a bit. The thumb opening is placed by inserting some scrap yarn and picking up for it later. The "face" is likewise picked up and knit onto the flap, and the ears (four of 'em) are worked individually in the round and sewn on. Finally the nose and eyes (buttons) are sewn on, and if you wish (and I did), you can sew a button to the back of the hand and add a loop to the top of the flap to secure it.

I'm already thinking of ways to simplify the pattern for the next time I make it (because really, how can I not make it again?). For starters, if the intarsia in the round intimidates you, it would be easy to cast on extra stitches and work the two sides of the lower part of the flap flat, then seam them. The face could be done in duplicate stitch. The ears could be picked up and knit on. And certainly embroidery could be used in place of the buttons on the face. I'm also thinking of the possibilities of using other colors and slightly different features to make the mittens look like other animals. And if cutesy isn't your thing, the pattern would be just fine to use for plain convertible mittens or mitts (it gives the option for an open thumb as well as a full thumb, and you could leave off the flap altogether if you just want a plain fingerless mitt).

I knit these with a little trepidation because it had been a full year since Rainbow had seen and loved the pattern, but I'm happy to report that she was absolutely thrilled with them! We've conveniently got a snowstorm coming tomorrow (the estimates I've seen range from 5 to 8 inches total), so it looks like she'll soon have a chance to actually use them, too!