Good morning! I am writing a bit later than usual today because it's still kind of the weekend for me -- we were all off yesterday for Labor Day, and we're off again today for Rosh Hashanah. If you're wondering the significance of the big number in the title, that is what year we've just begun in the Jewish calendar (yes, we've been counting for a long time!). We started the holiday last night (all Jewish holidays begin at sundown, as that's considered the start of the day) with a big family dinner, the first one we've been able to have since 2019. It was all of my family -- the three of us, my parents, and my brother and sister-in-law -- plus the Mister's brother and sister-in-law and our nephew, his parents, my brother's in-laws, and my uncle as well as the Mister's cousin, who just started a master's program here and decided not to go home for the holiday because she didn't want to miss classes so soon after starting. In addition to celebrating the holiday, we were also celebrating my sister-in-law's birthday (which was actually yesterday) and my brother-in-law's birthday (this Thursday), so we had a birthday cake in addition to the traditional apple cake.

And because it was her birthday, I could give her the socks I've been working on -- even right in front of her! 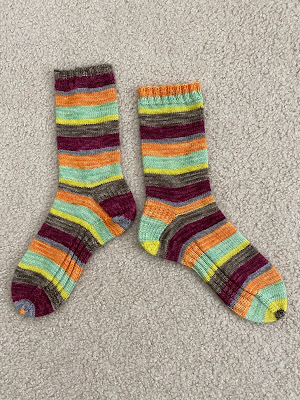 You've seen these quite a few times because I've been working on them since last month, but that second sock got knit very quickly in order to have them done by yesterday. I finished them Sunday morning during my weekly knitting Zoom and blocked them that evening. These are essentially my Piccoletti (Ravelry link) pattern on the feet and a plain stockinette leg. The yarn is Fibernymph Dye Works Bounce in one of Lisa's one-of-a-kind Serendipitous Stripes colorway. Because of the long stripe repeat, I didn't try to get them to match, but I'm pretty tickled that they coordinate quite well, especially with that little bit of color at the very tip of the toes. And my sister-in-law was thrilled with them, so that's all I really care about!

Yesterday was a pretty low-key day. The Mister went on a long (40+ miles!) bike ride in the morning, so Rainbow and I went to the craft store to pick up some supplies to make her a soft ottoman for the "reading nook" in her new room -- yes, I bought entirely synthetic super-bulky chenille-typle yarn! We then sat down to watch an episode of a Disney+ series that is based on a series of book she's been reading and do some crafting, and I finally finished that big charity hat. 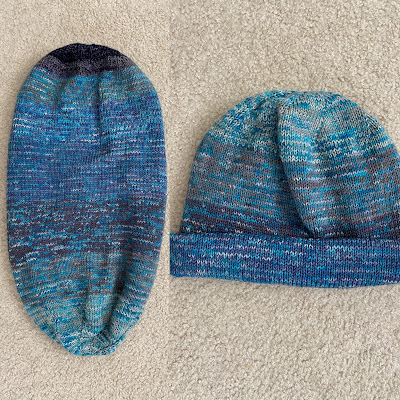 I made it large enough so that when one end is pushed inside the other, the brim can be folded up as you can see on the right. It's a bit large on me, so it will likely have to go to an adult with a large head, but I'm going to stretch it out vertically when I wash/block it in the hopes that it'll make it slightly narrower. I'd been keeping track of the weight of all the scraps I've been using and weighed what was left when I finished to determine how much I used. Would you believe I used up almost 800 yards of fingering weight scraps in this one project? I was pretty shocked when I saw the final number.

Today will be another fairly calm day. Our synagogue decided to make vaccination mandatory for those attending in-person services, so the Mister went on his own and Rainbow and I are watching the service online. As nice it as it can be to be there in person and wish everyone a happy new year, it's really not safe to be with a large gathering of people yet, particularly as Rainbow won't be vaccinated for another four months. And I have to say that neither of us much minds attending services in comfy clothes! It's going to be a beautiful day, so I'll be going for a long walk this afternoon, and then we'll go back to my parents' this evening to eat leftovers from last night's dinner.

I hope you all had an enjoyable and relaxing long weekend, and if you are celebrating the new year, Shanah Tovah!