If there was a theme for my most recent spinning project, it was "do it twice." Of course, I'd anticipated some of that because I started out with two bags of the same fiber, New Zealand Merino from Southern Cross Fibre in the colorway Yesterday's Love. What I didn't anticipate was that, in addition to spinning the two bobbins of singles to start, I'd also end up plying the yarn twice.

I wanted to have just one skein of yarn after I plied, and so in order to accommodate that much yarn (I'd started with at least 220 g/close to 8 oz. of fiber), I needed to use my Hansen miniSpinner to ply because its bobbins have the largest capacity of any of my wheels. In the past, my miniSpinner was my go-to wheel, but I hadn't used it in some time and was clearly out of practice. Unlike with a treadle wheel, where you have a sense of how much twist is being put into yarn because you're physically adding it by moving the wheel through your treadling, with an espinner you have to rely on how the yarn looks. And looks can be deceiving when it comes to ply twist, because not only do you lose a little bit as the yarn gets wound onto the bobbin, but washing the finished yarn reawakens the twist put into the singles (which is in in the opposite direction of the ply twist) and counteracts the ply twist. That's a long-winded and somewhat technical way of saying that I wasn't getting a good idea of how much ply twist I was putting into the yarn and it wound up being too little for my taste, though I didn't know that for sure until after I'd skeined and washed the yarn. Here is what it looked like at that point (apologies for the glare -- there wasn't good lighting to be had when I took this photo):

Notice how the yarn looks like of scraggly? That means there isn't enough ply twist, at least in my opinion. Fortunately, it's an easy enough problem to solve, provided you're willing to invest a bit more time. Once the yarn was dry, I put it on my swift and wound it into a center-pull ball. Then I ran it back through the miniSpinner to add more ply twist (which is much faster the second time around, and with an espinner means just sitting and holding the ball of yarn) and skeined and washed it again. Much better! 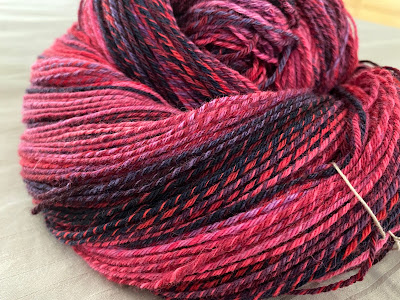 Can you see how the yarn looks like a cohesive unit now, rather than just some strands lying side by side? I'm much happier with it now. Here is a look at the entire skein: 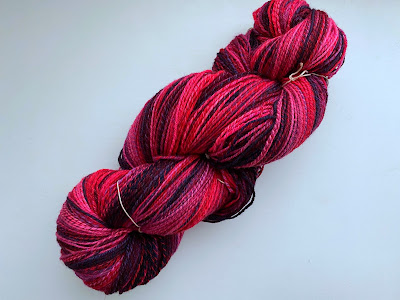 After plying the second time, the finished yarn is sport weight and approximately 580-ish yards/530-ish meters. It was also my last official project for Stash Dash, which I was really only doing on my own (the KnitGirllls moved all the discussion for the event from Ravelry to Discord, and though I signed up there, I didn't really have the mental energy to keep up with the discussion). I tracked my meters through an Excel spreadsheet I kept on my desktop and updated as I finished a project. Handspun meters for this event are counted based on the number of times the yarn goes through your hands, so you get credit for the length of the singles and well as the plying. Because this is a four-ply (sort of) yarn, that means I got to calculate the Stash Dash total for this skein by multiplying the final length times five -- and that means that this skein alone contributed 2,647.5 meters to my total. When Stash Dash officially ended on August 31, my final total for the entire event was close to 18,050 meters. Not bad at all!

Let's take a look at where things stand on my effort to spin down my SCF club stash. Here's the photo I took at the beginning of the year of what I had (and note that this does not include club fiber that has come in since, though I've already spun much of that), along with what I have already spun checked off: 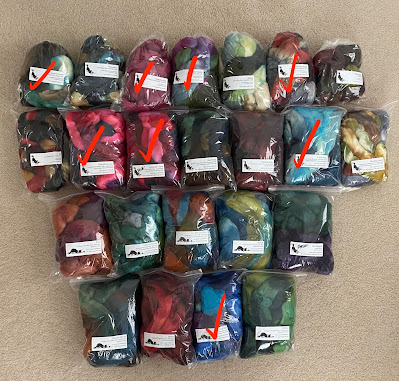 I've made a dent, but there's still a lot to be spun, and I still have another bag coming in each month. I so enjoyed my Shifty sweater spin that I'm contemplating spinning up another sweater's quantity in club fiber, though this time I think I'd do another combo spin. I pulled out several bags that are all predominantly green, with some hints of yellow, blue, and brown, that I thing would go well together: 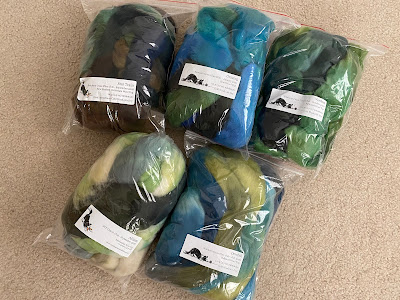 I think what I'd do with these is split them up into little bits and mix them up to spin the singles, similar with what I did for the yarn I used in my Ramona Cardigan. There's less variation in color in these fiber selections, though, so I think if I mixed them up well, I'd end up with yarn that reads green overall. I was thinking that such a yarn, assuming I could spin enough, would be great for my planned Garland (Ravelry link) sweater for use as the main color, and I could use a contrasting color or even an undyed yarn for the colorwork. Looking at the photo of all the club shipments, I also see quite a few in the red/pink family that look like they'd work well together, so perhaps I could spin those for Rainbow's Little Garland? I'm excited about the possibility of using up a lot of fiber in one spinning project, but I won't be getting started just yet -- my first priority is finally finishing my swatch for my Shifty so that I verify my needle size and get going on that sweater. One handspun sweater at a time!