Keeping Me from My Knitting

Good morning! It's shaping up to be another busy work week, with yet another big and urgent work project keeping me away from my knitting time (don't you hate when that happens?). I thought I would get a bunch done over the weekend, but we ended up spending a lot of time outside because the weather was so spectacular. I know these days are limited, so I'm trying to enjoy then while we can. On Saturday afternoon, we finally convinced Rainbow to go for a bike ride -- a shortish one. We did a trail along Pittsburgh's North Shore, along the Allegheny River to the Point and a little farther past that by the stadiums and the Carnegie Science Center. She's usually the one to complain when we ride, but she was all smiles this time: 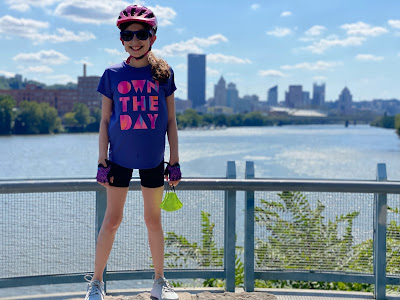 Because of the aforementioned work, I haven't gotten much knitting done, but I have managed to put in some rounds on a sock (something I can do a little of while reading for work) and have gotten to the heel flap: 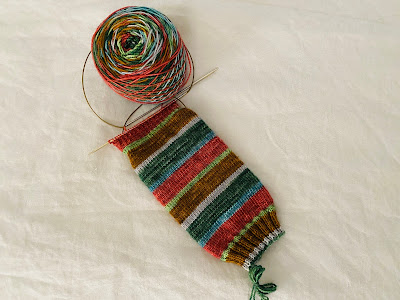 What I most want to work on right now, though, is my Shifty pullover, which I did finally cast on last week after dithering about the needle size for several days. I ultimately decided to go with the larger needle size and the smaller size in the pattern to account for the difference in gauge. I haven't gotten very far with it (mainly because I haven't had too much time to work on it), but I have at least finished the tedious 1x1 rib of the collar and the short rows to raise the back of the neck, which were a bit more complicated because they also involved joining the second color. It was a bit like wrangling and octopus there for a bit, with two strands of yarn and two sets of needles, but I did it, and now I am working in the round and it's going much faster. 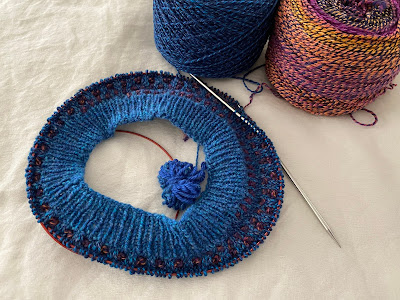 I'm hoping I can finish up this work project today and have more time to work on it so that I can make some visible progress. I've tentatively calling this my Rhinebeck sweater, both because I'm not sure if I can finish it in a month or so and because whether or not Rhinebeck happens still feels like it's up in the air, but I'm going to do my best to finish it by then regardless.

I hope to see some of you on tonight's Read With Us Zoom, and I'll be back tomorrow!