We have been so lucky this weekend, and I'll include Friday in that. We have had just the most spectacular fall weather -- low humidity, clear blue skies, warm sun. It's reached a high around 70 all three days but has been in the low 50s each morning when we've gotten up. I'm not sure how it always seems to happen, but we almost always seem to have this perfect weather for the Great Race, which we ran this morning -- yes, I did say ran! I didn't run all of it, but I spent more of the 3.1 miles running than walking, which really isn't bad considering that I hadn't run more than a block or so in about a year. I was able to run without stopping for the first mile (which is mostly downhill) at a pace of 8:30, which is about where I was last year. So my legs are still in good shape, even if my lungs are a bit out of practice. And other than some (totally understandable) tightness in my hips and legs, I had no ill effects, namely no hip pain. I'm sure I'll be sore tomorrow, but at least this opens up the possibility of starting to run a bit again. 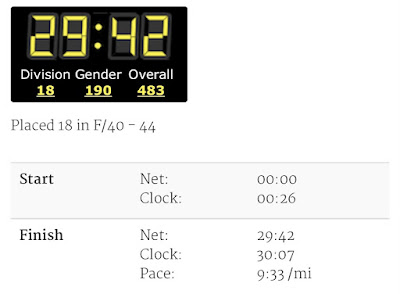 I certainly didn't break any speed records, but I did finish under 30 minutes, which was a goal I'd set for myself. Those breaks where I walked also allowed me to really enjoy the surroundings and the view along the Monongahela River. And everyone (the Mister, Rainbow, and my parents) was there to cheer me on at the end. They had ended up parking at my father's office building, so on the walk back there to get the car, we paused to take a photo with Mayor Caliguiri outside the City-County Building: 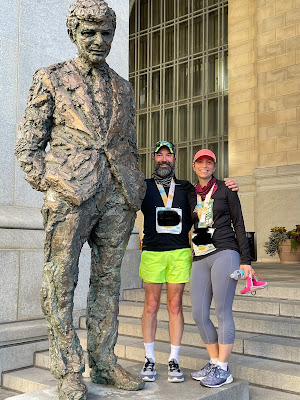 If you're not from Pittsburgh (and also older than a certain age), the name will mean nothing to you, so let me explain: The official name of the race is the Richard S. Caliguiri (that's pronounced like "cal-uh-JURE-y") City of Pittsburgh Great Race. He was our mayor from 1977 until his death from amyloidosis in 1988. This statue of him was unveiled two years later. I don't remember when the race was renamed in his honor, but it's been held almost every year since his first year in office, and a dollar from every registration goes toward the Richard S. Caliguiri Amyloidosis Fund at the Pittsburgh Foundation. This morning at the starting line of the 5K, they announced that this year the funds raised from the race over the years would surpass $1 million. Pretty amazing, right? Last year's race was all virtual -- you could run your own personal 5K or 10K and submit your time, and they'd mail you your race shirt and finisher medal. This year there were definitely fewer participants (a little less than 1,500 for the 5K compared to more than 2,500 in 2019), but it was really good to be out there again with other people, who always spur me to run a little harder. I even ran next to a woman running with her dog for a while!

But enough about running -- let's get to the fiber talk! I've managed to spin a little bit every day for most of the past week, and the bobbin is filling up nicely! 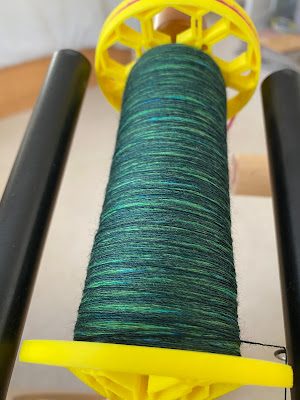 I have 10 little balls of fiber left in my first bag, and I'm starting to doubt whether I'll be able to fit them all onto a bobbin. If not, then whatever is left will be set aside (and I'll do the same with the other two bags of fiber) so that I can spin a fourth bobbin of singles. All that will mean is a bit more trouble in the plying, as I'll have to switch up which three bobbins I am plying from periodically, but it's not a bit deal. I know these bobbins do hold a lot, and I can over fill them a bit, so I'll just keep spinning and see how it plays out. I'm not terribly concerned, especially as I've been really enjoying the spinning. After the stress of this month, it's been very meditative to sit down with the fiber and treadle the familiar rhythm. Perhaps this week ahead will see the first bobbin filled.

I hope you've been enjoying a beautiful weekend wherever you may be!