I double checked and it is Wednesday today, so that means it's time to link up with Kat and the Unravelers to talk about knitting and reading!

Though I had big plans for getting a lot of knitting done while I was away, I had apparently forgotten just how much work it is to work a show and how tired I would be at the end of the day. I think I got about a round and a half done on my Shifty in the five days I was gone. The good news is that I did get some knitting done, just not what I expected. I usually take a sock project with me to work on while I'm in the booth (there's a lot of standing around, and it keeps my hands busy), so I figured I'd get a start on socks for my mother-in-law with the Fibernymph Dye Works yarn I just got. In reality, I made more than a start: 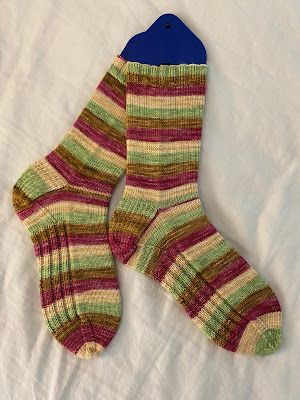 Yep, I cast on the first sock on the drive up to New York and grafted the toe of the second as the Mister and I were in car line to pick Rainbow up at school on Monday afternoon! These are a combination of my generic sock recipe and my Piccoletti pattern (Ravelry link) worked over 68 stitches on size 0/2.0 mm needles. I opted for mismatched stripes, and though I cast on by starting at the point where one color changed to another on both socks, they don't quite coordinate -- you can see that thin red stripe across the instep of the sock on the right. That bugs me a bit, so I'm going to take a scrap of yarn in the red color and duplicate stitch another row or two so that they look like they match a bit better. Otherwise, I am happy with them, and it feels good to have two holiday projects done before the end of October.

This week I'm focusing on my Shifty pullover, which has passed a major milestone: Last night I split the sleeve stitches from the body stitches! 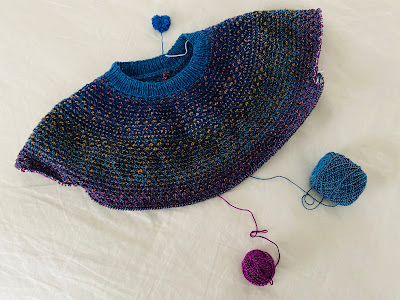 I mentioned that I was ignoring the color change instructions a bit in order to maximize the colors I like in my handspun. I am going to use up the first of my main color skeins as much as possible (I weighed it after I split off the sleeves so that I could be sure to have some to use on the sleeves as well as the body), and last night I pulled off the rest of the bright purple on the first contrast skein. The remainder of that skein is pretty dark and I don't think has enough contrast, so I'm setting it aside. I'm hoping now that I've made the split and have fewer stitches on the needle, I'll be able to make some real progress.

I have only finished one book in the past week, which isn't surprising given that I didn't have much time to read over the weekend. Unfortunately, it wasn't a great finish.

I have been wanting to read Klara and the Sun for a while, and I know many of you have already read it. Naturally when I decided I was ready for it, there was a long wait at the library. I have to give Ishiguro credit for an interesting idea, but ultimately there were too many questions that were unanswered for me, even given that, in a story told by a non-human, there are things that the reader expects will be unexplained. I just felt completely unsatisfied when I finished. I'm sure this would make for a good group discussion, but it felt flat for me reading it on my own. I gave it 2 stars.

On the ride home from Rhinebeck, Amy and I started listening to the audiobook of Daisy Jones & the Six. She does not seem to like to listen at faster-than-normal speed like I do, so we only made it through about two-thirds of the book, and now I'm on the hold list at the library to finish it. Yesterday I listened to the most recent episode of the What Should I Read Next podcast on my walk, and the book The Push was mentioned, which reminded me that I'd wanted to read it, and as luck would have it, there was no wait for it at the library. So now I'm about 40% through it, and if work cooperates today, I will finish it. I'm also hoping to finally start The Madness of Crowds today.

How about you -- what are you working on and reading this hump day?