I've Been a Busy Little Bee

You know one really great thing about working from home during a pandemic? When work is slow, I can craft! And I have I ever been crafting lately. Last week was pretty darn slow at work, so although I had to keep an eye on my computer throughout the day, I pretty much always had something going in my hands. And that means I've made a lot of progress on my current projects. I just discussed my spinning two days ago and have only just started a new bobbin of singles since then, so no update is really needed there, but look, I finished a project! 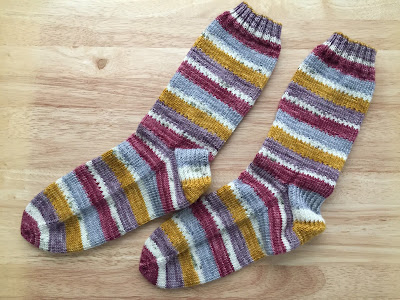 These are the socks that I've been knitting for my sister-in-law as part of planning way ahead for holiday gift knitting. I finished these up last Thursday, getting the foot of the second sock done in just a day or two. I used my regular sock recipe and size 0 needles, working them over 68 stitches. The only modification I made, of course, was to add a little visual interest by slipping every other stitch for a round when the yarn changed color; I did this all the way around on the leg but only on the instep on the foot. I did take steps to make the stripes match on both sock, and I also manipulated the striping a big after I finished turning the heel by pulling out a little yarn to get to the next color so that I wouldn't have one awkward round of gold as I started the gussets. That meant a couple of extra ends to weave in, but I did that under the heel, which I figure will just add a bit of extra durability. My sister-in-law's feet are a bit smaller than mine, so I knew I wouldn't have to worry about running out of yarn, and I still have some leftover. I have yet to block these, but I will soon and then pack them away until December or until I can't wait to give them to her, whichever comes first.
I also made quite a bit of progress on my Tegna -- I've now split for the front and back and am ready to start the shoulder shaping on the back.
Now that I've made the split, I'm working with only one strand of yarn; the purpose of alternating the skeins every round before was to keep the color progression without too much variation, and now I should have front and back pieces that more or less match. This project was great company last week while I was reading, but now that I have to count and do short rows, it requires a bit more attention.
My main focus yesterday, as it has been for the past few weeks, has been the Through the Loops Mystery Shawl. I didn't have to tink or rip back at all to complete Clue 4, but I also didn't manage to get it all done yesterday, so I literally just finished the last four rows. Spoiler alert -- here comes a photo with Clue 4 all done! 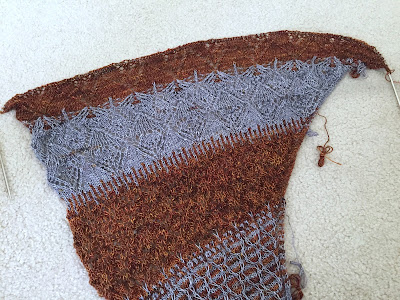 I think this photo doesn't do it much justice because the lace is all scrunched up and it's hard to see the small section with mosaic knitting, so trust me when I tell you that it's stunning. This has definitely been a fun knit, and I'm really looking forward to seeing where it goes in the last two clues. I'm also thankful that I've been able to keep up with the clues every week!
Though I haven't been able to do it as part of multitasking as much in the past few days, I have still been reading. I finished Such a Fun Age last week, which was just so-so for me. It had the potential to be better, in my opinion, but it wasn't bad. I gave it 3 stars. I am now onto The Beautiful Mystery, which I've anxiously been awaiting from the library. I'm fighting simultaneous urges to rush through it (because I know others are waiting for it) and to savor it (because I love these books and I've been waiting to read it). I expect I'll make it through all of it this week. I'm also still reading How to Be an Antiracist and am taking my time with it because it deserves my full attention.
Posted by Sarah at 2:42 PM