First, I want to thank everyone for leaving such nice comments on my last post about the new shawl design. It feels very good to have gotten it out after working on it (mentally and physically) for more than half a year.

Second, it's Thursday (and my sort-of Friday, because I'm taking tomorrow off from work), so I'm joining up with Carole and friends with three check-ins on my leisure activities.

1. Knitting projects
Over the past week, I've been rotating through three main knitting projects. First, there are the socks I started for my sister-in-law in the long-term planning category. They have been worked on while reading and while attending (virtual) meetings. The first sock is now finished and the second begun. 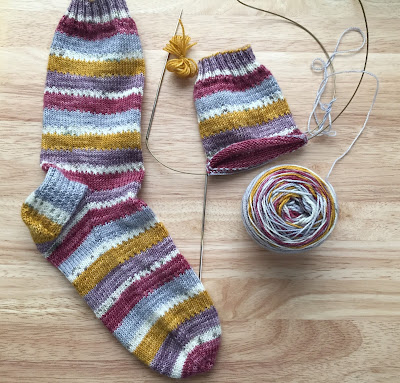 I did wind off yarn when I started the second sock so that the socks would start in the same point in the striping sequence, and I made some notes for myself so I could (fingers crossed) get them to match. My sister-in-law's feet are a bit shorter than mine, so I know I'll have plenty of yarn.

I also have been working on the Through the Loops Mystery Shawl and spent most of the day Monday (in between work meetings and whatnot) knitting up Clue 2. I hope no one is concerned about spoilers, because I'm going to show you what the shawl looks like through this clue. You've been forewarned! (Side note: When I posted a photo of Clue 1 a full week after it came out on my Instagram feed, someone commented that they'd been spoiled and probably shouldn't follow the hashtag for the shawl. If you don't want spoilers, why are you following the hashtag in the first place?) 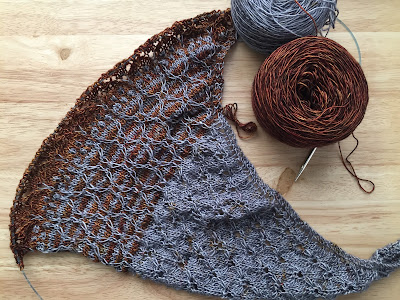 I'm a bit surprised how much I'm enjoying this, because honestly, if I saw this much of a pattern before buying, I probably wouldn't be interested, but I'm having such fun! The second repeat of the lace in Clue 1 was a bit of a slog for me, but the second clue was completely engaging because of the variety of techniques used. I'm excited to see where Clue 3 takes us!

Finally, there's my Tegna, which I've been working on almost every evening. I finished up the lace over the weekend, so now it's just miles of stockinette in the round, and the only thing I have to pay attention to is switching which strand of yarn I'm working with when I get to the beginning of the round. 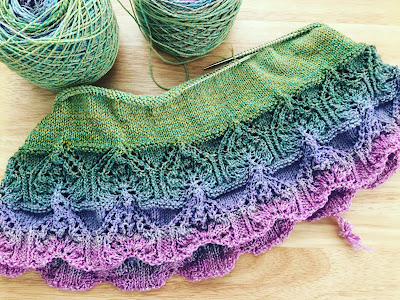 I absolutely adore how the yarn is working up and am feeling rather proud for working out the plan when I spun it.

2. Crochet/100 Day Project
It's been a fairly busy week at work, so I think I may have forgotten to work on this one day by accident, but the blanket is continuing to grow. I'm into the first of the last two original skeins of yarn we picked for it, and in the meantime Rainbow and I found six more skeins of Felici in my stash, so those have been designated for the blanket as well. 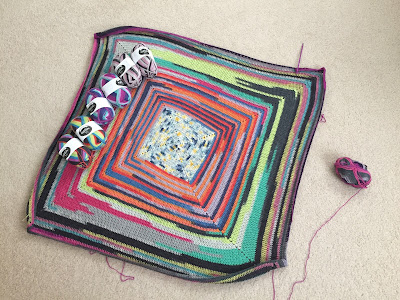 For a sense of scale, those are 50 g skeins of yarn, and if I lay it out flat(ish), it's measuring about 37 inches across.

3. Reading
Work has gotten in the way of my reading time a bit this week, but I've finished two more books since last Thursday -- but still no bingo! 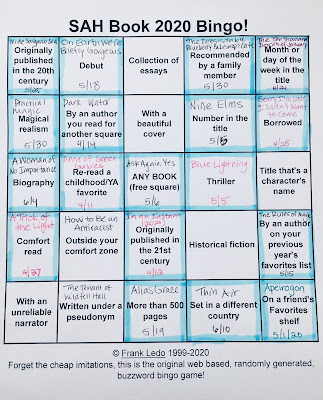 I listened to A Wrinkle in Time while exercising and doing household chores last week. It's a book I read several times as a child but didn't remember very much about, so I'd been meaning to reread it. I actually bought a paperback of it a while back to give to Rainbow (who, it turns out, is not at all interested, grr), but when I saw it was available from the library on audio, I jumped at it. This particular version is narrated by Hope Davis and has additional "bonus" features in the form of an appreciation by Ava DuVernay (who directed the recent film version), an introduction by the author, and an afterward by the author's granddaughter that gives some background about the author and how the novel came to be. While I enjoyed it, I found that it had lost some of the luster that it had for me as a child. But that's okay. I gave it 3 stars and put it in the "Children's classic" box on my second bingo card.

Last night I stayed up a teensy bit late to finish reading Thin Air, the sixth book in Ann Cleeves' Shetland series. These books are consistently good and I'm a little sad that I have only two more left to read (though I hear the Vera series is good as well). I gave the book 4 stars and put it in the "Set in a different country" box on my original card. It's also the third Shetland book to fill a square on this card!

It's a good thing I finished that book last night, because when I went into the library app to return it, I discovered I'd gotten two books off my holds: Picnic at Hanging Rock (which has been talked about recently on the Craftlit podcast) and Such a Fun Age. I'm pretty sure I can put the former into the "Historical fiction" box on my card, but I'll have to figure out where to put the latter. In any case, I have quite a lot of reading ahead of me!

I'm looking forward to a long weekend of reading and crafting, and I hope yours is full of the same!
Posted by Sarah at 10:33 AM