When I started spinning this Rambouillet fleece a few weeks ago, I was completely excited by it. After finishing the first three bobbins (which was my original objective), it was going so well that I thought I'd continue and just spin it all. After all, I was averaging a bobbin every two to three days, so how long would it take me to spin 11?
The answer would be not that long, but the assumption is that I wouldn't get really bored with it. And you know what they say about making assumptions. Though I still very much like spinning it, the same brown fiber over and over does get a little old, not to mention that my body is not as young as it used to me and my knees get angry with me if I do too much treadling. So I haven't done as much spinning in the past week, and as a consequence I'm not yet done with the sixth bobbin. 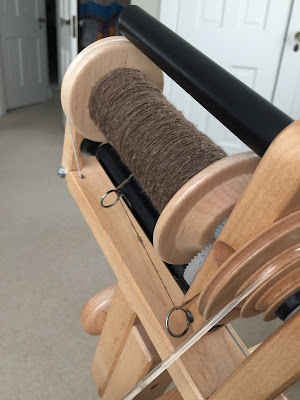 The important thing I'm trying to focus on here is that I'm more than halfway done. It would be great if I could finish all the singles by the end of the month. It would be super if I could then do the all the plying and be done with the fleece before the start of the Tour de Fleece (which I believe is occurring even though the Tour de France is not). If I don't, then I don't, but in the meantime, I will be like Dory and Just Keep Swimming -- or rather Spinning.
Posted by Sarah at 6:27 PM