It's Thursday again and time for another list of three things. As we wrap up our 14th week of staying home, I've come to realize that there are three big areas of my life that are helping me to keep calm and keep it together. These are probably no-brainers, but when you need a list of three things for a blog post, they work!
The first thing is obviously crafting. I've become a crafter who has a lot of projects going at once -- something that previously would have given me a lot of anxiety -- because I've found that my attention span has noticeably shortened, so I like having variety and the ability to jump from one project to another. This week the focus has largely been on two projects: my TTL mystery shawl and my handspun Tegna. I'm going to talk about the latter so that the picture of the former doesn't show up right away, just in case you're worried about spoilers. 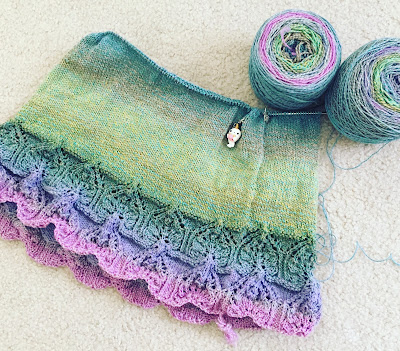 This project has been the perfect thing for knitting while reading (something I'll discuss in a bit). I've been working on it most evenings and have only a couple more inches of body to knit before I reach the specified body length and can split for the front and the back. I am not stretching out the lace border much when I measure, and I'm pretty sure I can block it fairly aggressively to get some additional length should I want it.
Most of my knitting time this week, though, has been spent working on my mystery shawl. Remember how when I last posted, I was just going to secure that dropped stitch and carry on as if nothing had happened? Let's just say that plan went out the window shortly after I posted it publicly. I sat down to work on the shawl and decided that something else had gone awry with the lace at the beginning of Clue 3, so I ripped back a bit. When I got to the section just above the dropped stitch, I thought I might as well try to drop down a handful of stitches there and try to fix it. It looked like crap, so I tried again. In short, I ended up ripping way back into the last third or so of the second chart for Clue 2, reknitting it, and then starting fresh with Clue 3. It took me until yesterday afternoon to get caught up, but now I'm much happier. 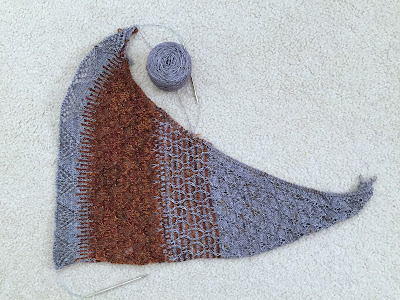 Of course you can't see the lace at all in this photo, but I trust it will be more apparent after blocking. I should note that what I thought was an error on my part in the lace at the beginning of Clue 3 is still there, so I've concluded that it's the pattern and not a mistake. It's something I hope will also resolve with blocking.
My second sanity saver is exercise. I've been continuing to run several times a week, and I've actually surprised myself by increasing my total miles per run. As I did for the past two months, I'm tracking the distance I cover in each run and the cumulative distance for the month. 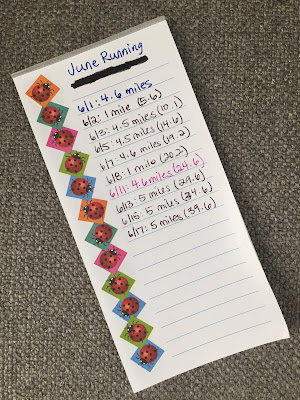 I know this analog method of tracking is very primitive, and I do use an app when I run that tracks distance and pace and all that jazz, but it also assumes I'm running the whole time. Though I have increased my endurance significantly (yesterday, for instance, I ran 4 miles straight), I do generally walk somewhere in the middle to catch my breath, so my total distance covered isn't the same as my total running distance.
All the running is making me feel pretty great, but my knees also need recovery time, so I alternate running days with long walk days. I generally walk (at a brisk pace) for about an hour; I recently downloaded a walking app to see how far I go, and it's usually in the neighborhood of 3.5-4 miles or so. All this exercise is of course good for my physical health (and it's helped me start a pretty cool streak of 29 days of 10K+ steps to date!), but I've found it's also essential to my mental health. Getting time out of the house, away from the computer, breathing fresh air is so good for reducing stress and anxiety. I am so thankful for the time and ability to get outside every day.
Finally, my third item is (no surprise, I'm sure) all the reading I've been doing. Later this morning I should be able to finish Such a Fun Age -- I have less than 50 pages to go -- and get another bingo on my card. I'm next in line at the library for my next Gamache book, and I'm still reading How to Be an Antiracist. I have three squares on my first bingo card left without a book associated with them (though I have one of my library holds in mind for one of the three), so it looks like it won't be long until I achieve a cover-all!
I'm off to see what Carole and friends are up to, and I'd love to hear what's keeping you sane these days in the comments!
Posted by Sarah at 9:35 AM