My newest shawl pattern has been a long time coming. I'd intended to get the sample knit up (or at least started) while we were on vacation in Florida at the end of December. I typically use that time away to get a head start on design samples for the year ahead, but for whatever reason, I didn't do as much knitting this past year. So the yarn for the sample, which had already been wound, came back home in the same form, and it wasn't until March that I finally got around to casting on.
The pandemic stole my knitting mojo for a while, but fortunately the idea for this shawl came to me fully formed. Back in the "old days" when I was a kid, birthday party favor bags always had an assortment of inexpensive toys and often included those plastic maze toys where you had to try to get a tiny silver ball through a labyrinth. Do you remember those? My idea was to use the method I call short-row intarsia to create a shawl that looked like one of those toys. I was pretty happy to discover that when I finally got around to knitting it, it looked exactly like I'd imagined. 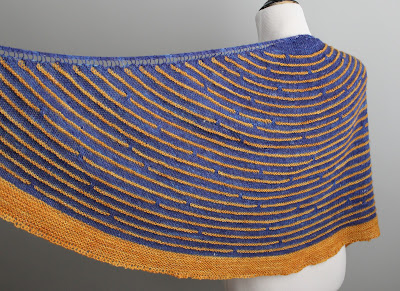 This shawl is the ultimate in customization. The pattern is essentially a formula, so every shawl created from it will look different. For one thing, it can be worked with any amount of any weight of yarn and at any gauge. Once you've completed the original set-up rows, there's a four-row pattern repeat that is worked until you're just about out of your main color (or you're just ready to be done), and then all that's left is adding a border in your contrast color. 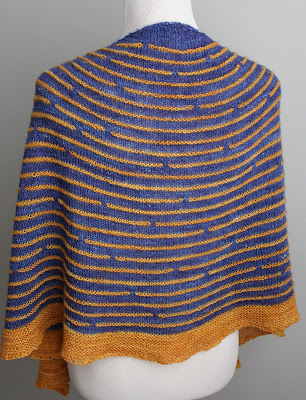 The shawl is worked from the top down, starting with a garter tab, and uses shaping that's typically used to create a crescent-shaped shawl (6 increases every two rows). But then you add in the short-row intarsia stripes, and the added fabric created by them results in a shawl that's closer to a half circle after blocking.
So just what is short-row intarsia, exactly? I'm sure I'm not the first to come up with it, but I've now used it in several of my shawl patterns. In a nutshell, it's a way to do intarsia without having to deal with the tangle or extra ends of the many bobbins and balls that you typically see in intarsia. Instead, the contrast color is added in short rows, which enables you to use just one strand of yarn at a time while the other just hangs from the work until you're ready for it. The only ends to deal with are the normal ones at the beginning and end. It may sound a little complicated, but I promise you it's not. If you can knit stripes, you can knit this. 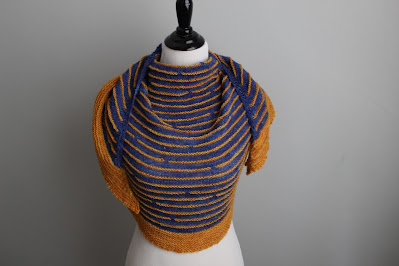 I couldn't resist a name with a pun for this design. The yarn I used in the sample is MollyGirl Yarn Honky Tonk Lite, a fingering-weight singles yarn that's a blend of superwash merino and Ingeo (or corn) fiber. And while I didn't necessarily pick these colors because of the association, they just happen to be the colors of the University of Michigan, my brother's alma mater: maize and blue. You see what I did there -- corn/maize/maze? Yeah, I groaned, too, when it occurred to me, but once it did, I just had to go for it.
The pattern is now available on Ravelry, and if you're interested in buying a kit, Angela of MollyGirl Yarn has some available on her site. Through June 15, the pattern is on sale for $1 off in my Ravelry shop using the code AMAZING. (Yes, I went there. Go ahead and groan again!)