I know I don't normally post on Wednesdays, but yesterday's post was pretty heavy and serious. I felt like it made sense to add an extra post this week, so I'm joining it with Kat and friends for Unraveled Wednesday.
There has been no actual unraveling this week, but there has been a lot of wrangling of WIPs. I'm normally not someone who has a lot of projects going on at once (usually I have a smaller project that goes with me to work and a larger, more complex project for my evening crafting time), but the crazy times we live in mean that my attention is similarly crazy and scattered, so I find myself with four active yarn WIPs at the moment (I am excluding my spinning from the count).
I'm continuing to work on the crochet blanket for Rainbow as part of the 100 Day Project. We're on day 50-something, I think; I've done my best to check off each day, but I'm not 100% sure I've recorded every day. Yesterday I joined in skein number 7 of Felici, the penultimate skein of the original yarn selected for the blanket. 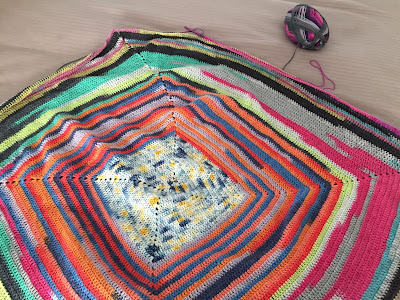 I'm completely sure now that I'll be adding in more yarn once I get through the second ball of this colorway (Goth Kitty, if you're interested), but I will be letting Rainbow determine what yarn is added and how much. I think I've also figured out that the skewing that's happening is at least in part due to a slight error I've been making in joining as I get to the end of a round which has translated to one less stitch than I should have when I start the next round, but I'm hoping that I will able to block out the blanket to be square enough in the next. Rainbow has not complained about the effect, and if she's happy, I'm not worried about it being perfect.
Late last week I cast on for my handspun Tegna, which is what I've been primarily working on in the evening. It's been a bit slow going because the rounds are long, some of these stitches are a bit tricky (hello, k4tog), and my attention hasn't been fully focused on knitting the past few nights anyway. But I think it will be much faster once I get through the lace chart and am just working in stockinette. 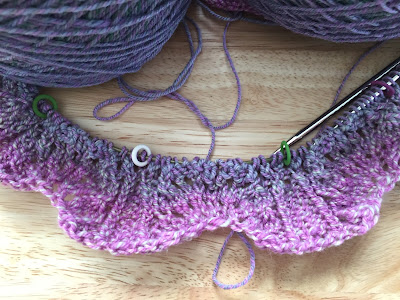 The Through the Loops Mystery Shawl 2020 started this past Monday, and I cast on for it pretty much first thing on Monday morning. I am knitting it using two skeins of Skeinny Dipping Merino Silk Single in the colorways Zingbat and Malaria Dreams. It's very different from the yarn Kirsten recommended for the pattern, but I am loving how it's knitting up. Zingbat, which is the color I've used for the first clue, looks almost like metal wire when knit up; I've included the skein of Malaria Dreams here so you can see how well it coordinates with the speckles in Zingbat. 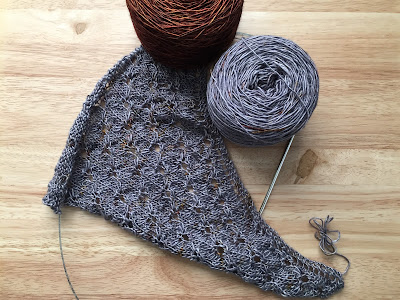 Finally, I've got a sock WIP. While I have no room for more socks in my own sock drawers at the moment, I like to have a sock on the go, so I thought I'd get a head start on holiday knitting. These are going to be for my sister-in-law, who proved herself totally knitworthy last year when I gave her the first pair of socks I knit for her. I thought of her immediately when I saw these colors. 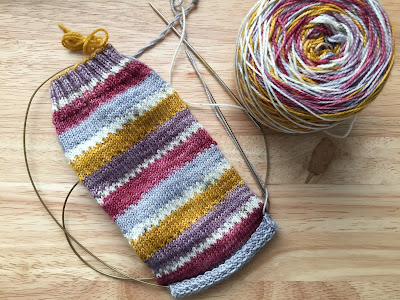 I'm doing my usual top-down vanilla sock (heel flap and gusset, wedge toe) with the slight variation of working the first round when the color changes as (sl 1, k1). This means that I can't entirely work on this sock without looking -- I do have glance at it from time to time to know when the color is changing -- but at the moment it's the best thing to work on while I'm trying to knit and read at the same time.
My Breathe and Hope shawl is still on the needles (sorry to disappoint those of you who told me to rip it out!). I guess I didn't do a good job of explaining my issues with it before: There is nothing wrong with the pattern itself, or with the yarn, or really with knitting it. It just wasn't what I wanted to be knitting at the time. But I do like the pattern and the yarn and very much would like to have the finished shawl, so it's hibernating for the time being, and I'll come back to it when the mood strikes.
I have not been reading as much as I'd like the past several days, mostly because I've been watching or reading news instead. But I am enjoying my current book, A Woman of No Importance: The Untold Story of the American Spy Who Helped Win World War II. I can't remember where or how I first heard about this book, but it's been on my want to read list for a while and on my hold list from the library for at least a month. I'm nearly a quarter of the way through it, though I'm hoping to make some significant progress today if my schedule allows. I've read a ton of fiction set during WWII but not nearly enough nonfiction, so it's really fascinating to learn the actual facts that formed the basis of some of that fiction.
Up next on my TBR list is How to Be an Antiracist. I've had the physical copy of the book on my nightstand for months and have been meaning to get around to reading it, but the events of the past week have made it clear that I can't put it off any longer. I'm eager to add it to my Goodreads bookshelf that I've titled My Antiracist Education, a shelf that has far too few books on it. I'm going to make it a real priority to add to that shelf, so I welcome any recommendations you have.
Posted by Sarah at 9:19 AM