There's a lot of sadness in the world right now; I've talked about it and don't want to rehash it, but I don't think I need to, as I'm fairly sure you're all aware of it without me telling you. As someone with a history of depression and anxiety, it's very easy for me to get overwhelmed by sadness and worry, and one coping mechanism I've been using throughout this time is to focus on good things when I find them and cultivate gratitude for what I have. So for today's post, I'm joining Carole and friends by sharing three things that are bringing me a bit of joy right now.
1. Our "victory garden"
During WWII, many people in the United States grew a victory garden to supplement their food supply in a time of scarcity. While we have not had a real scarcity of food personally, I do derive a fair amount of joy and satisfaction from growing my own food. In the past, though, I haven't been too successful at it. Our backyard isn't really ideal for a garden, as it doesn't get a ton of sunlight, and typically during the summer I don't always take the best care of the garden as a result of being busy. Seeing as I have a lot of time this year, though, I thought it would be worth being a big more adventurous. I did buy tomato plants and herbs last month, but Rainbow and I have also been experimenting with starting some plants from seed inside. 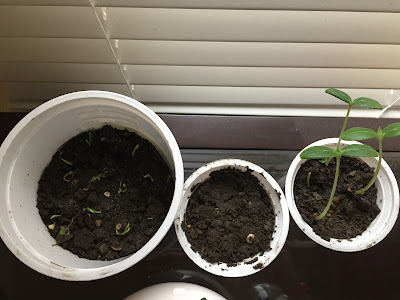 We've started the seeds by placing them in snack-sized plastic baggies with a wet paper towel and putting the bags next to a window that gets a fair amount of sun. Left to right here we have bell peppers (the seeds came from a pepper we bought at the store), peas, and cucumbers. I've still got some butternut squash seeds in a bag, but they don't seem to be doing anything. The peas here are actually the second round we've done this year; the first round was grown from peas that were harvested last year and allowed to dry, and they've already been transplanted outside.
2. My $5* Sweater**
I ordered some yarn late last week that arrived a couple of days ago. No, I didn't really need more yarn, but I'd been wanting a sweater out of this yarn for a while, and I took advantage of the fact that I had a gift certificate and a discount code to use that made it extremely affordable. 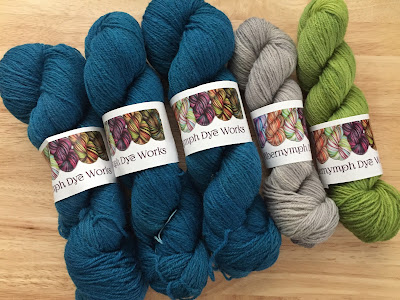 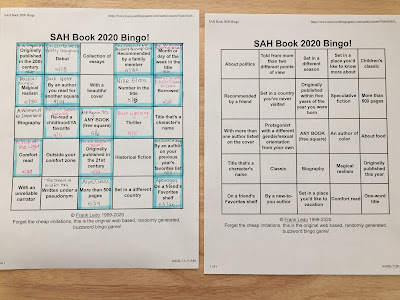 I knew that several of the books I plan to read would not fit into squares in my first card, so I got a second with some appropriate categories. If you look closely, you'll see that I have only seven squares on my initial card that have not been filled, and I'm pretty confident I'll be able to fill those with no problem by at least midway through the summer -- several of my library holds alone will fill some of those squares.
I hope that whatever you're doing this week and over the coming weekend, you find something to bring you a little joy.
*Technically, $4.88
**Some assembly required
Posted by Sarah at 9:07 AM