I am so close to finishing my two main projects on the needles. I spent all of my knitting time last night working on my second Vitamin D sleeve, and as a result, I now have approximately 40 rounds to knit before it's done. I was a very good knitting and wove in all the other ends before I started the second sleeve, so as soon as I bind off, I'll have only two ends to weave in to be officially done with this sweater. Assuming that can happen tonight, it will have taken me exactly 28 days to knit this sweater -- not bad considering my knitting time is limited and this is a sportweight sweater.


While I've been thinking about finishing this sweater, I've also been tending to my already-completed ones. The weather is now more reliably springlike, which means it's just about time to pack up my sweaters until the fall. I usually wash them all before I pack them away (to get rid of any dirt and body oils that might attract you-know-whats), so I started that process over the weekend. On Sunday, I washed my handspun aran and my Calligraphy Cardigan. Last night, my Blue Betty and my FLS went into the tub. I'm trying to wash sweaters together that are a similar color to prevent any dye bleeding, and two at a time seems to be a reasonable number. I have four "blocking towels" (old ones that I use to roll up the wet handknits) and am using two for each sweater. They get pretty soaked, and the sweaters take a couple of days (at least) to dry, so I'm aiming for two sweaters every other day. At this rate, I should have everything washed in two to three weeks. There's something so nice about going through all my handknit sweaters.

In addition to the new sweater I will have in a matter of hours, I'll also soon have a new pair of socks to work into the rotation (because while it's no longer really sweater weather, my feet are still cold most of the time). My second Rubus suberectus sock is cruising down the foot and should be finished by the end of the week. I can usually get about two repeats of the stitch pattern done in one lunch break, and I have only 2.5 repeats (plus the toe) left to do. 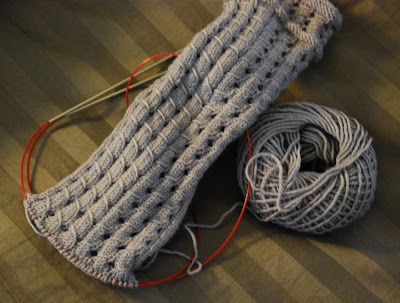 With these two projects about to be wrapped up, the natural question to ask is, of course, "What next?" I can't cast on for my Mad May project until next week, though of course there's some swatching to do. My lunchtime knitting will become socks out of the experimental handspun, which will be fairly simple (basic stockinette, though I'm planning to do something to the sock knit with the opposing ply yarn so that I can tell them apart). As to the bigger project, I think I've convinced myself that I should spend the next week working on my handspun Breezy Cardigan again. The last time I picked it up, I had finished the body and started the first sleeve. There really isn't all that much knitting left to do -- two sleeves and the ribbing on the fronts and around the neck -- but I find that I get bored with this project if I work on it for two long (mainly because progress is so slow even when I put in a lot of time on it). I would really like to finish this at some point this summer so that I'll have it ready to wear in the early fall. I think if I can work on it in small chunks of time as a way to break up longer stretches on other projects, that might actually happen.
Posted by Sarah at 8:16 PM