It's taken me a few days to get some decent photos, but I can finally share my April sweater with you! 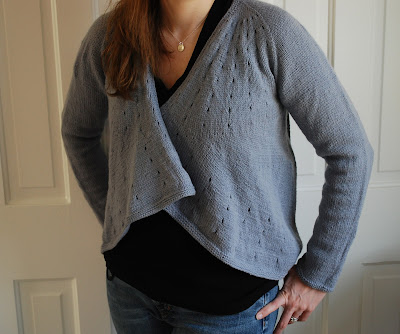 Pattern: Vitamin D by Heidi Kirrmaier
Yarn: Imperial Yarn Tracie Too (100% wool), colorway Rain, three full skeins and a bit of a fourth
Needles: US 4 (3.5 mm) and US 3 (3.25 mm)
Started/Completed: March 28/April 24
Mods: lengthened the sleeves (including adding additional decreases) and worked them in the round

This is a brilliantly written pattern. At first glance, it's quite a bit different from an ordinary sweater pattern. Rather than listing the numbers for each size in order in a sentence, Heidi uses tables with all the relevant numbers. This makes it really easy to look down one column to see all the numbers for your size and less likely that you'll read the wrong number.

The construction is pretty darn clever as well. The sweater is a top-down raglan, but the raglan increases are only done on the sleeve stitches. On the fronts and back, the increases are done in the form of eyelets (yarnovers) every eight rows or so. After dividing off the sleeve stitches, the back and draped fronts are shaped with a series of short rows, which you can see in the photo below. 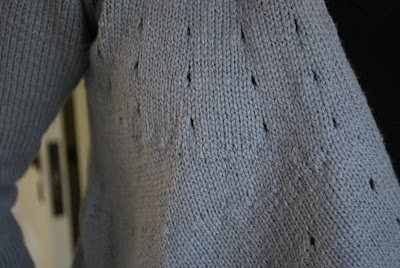 I had a bit of a thrill when I got to the bottom of the body and read the instructions for working the trim on the neck. After binding off the trim on the bottom, the pattern says to keep the last stitch live and on the needle and immediately turn the work to pick up stitches along the neckline -- almost the same technique I used in Ellyce. That made me feel pretty smart.

The sweater was a surprisingly fast knit considering that the yarn is sportweight and it was knit on relatively small needles. The top part is very addictive, as you can't wait to get to the next eyelet row. Then when you get to the short rows, you don't want to put it down until you've finished the entire section. The sleeves really flew, and they were probably a little faster because I worked them in the round rather than flat as instructed in the pattern. There's a good reason for working them flat -- the rest of the sweater is worked flat, and working the sleeve flat and then seaming them would guarantee that your gauge won't change. My gauge isn't so different, though, and I'm happy to avoid seaming when I can. I did pick up an extra couple of stitches in the underarm and decreased them away in the first round to avoid holes, and I also lengthened the sleeves to full length (if I'm cold enough to wear a sweater, I want it to cover everything).

A word about the yarn: For the most part, I really enjoyed it. The yardage in each skein was really fantastic. The Ravelry page says it has 450 yards/skein, but my tags say 395. I still have to weigh the fourth skein, but I know I only used a small amount of it because I only needed to break into it to knit about four or five inches of the second sleeve. I really liked that the yarn (well, the wool) was grown and spun in the United States, and it had a somewhat rustic feel to it; it wasn't perfectly uniform in its diameter, so the knit fabric has a bit of texture to it. My one beef about this inconsistency is that I had a noticeably thin section when I joined my second skein (right about the time I started the first set of short rows in the body), and you can clearly see a line in the sweater if you hold it up to the light: 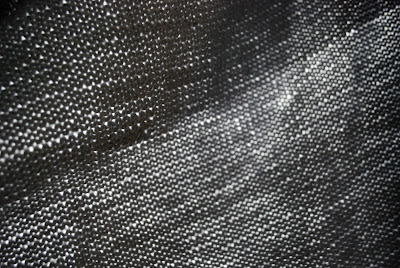 This won't stop me from using the yarn again, though, and I'm looking forward to using the worsted version, Columbia, for a sweater in the future.

So, now April's sweater is done and I'm ready to start the next one. Tomorrow, as it's May 1, I'll be casting on for my Gnarled Oak Cardigan for the Mad May knitalong. I dutifully knit and washed my swatch over the weekend, and it looks like I'll be using my size 4s again. My gauge is a tad off (I'm getting 22 stitches over 4 inches rather than the called-for 24), but the fabric is nice and firm and this gauge will allow me to knit the 35.75" size and have it come out closer to my actual bust size with very minimal negative ease.
Posted by Sarah at 8:32 AM