Over and Done With

I finished the CMF mystery fiber. If you recall, it wasn't spinning very easily for me, so I decided to do a quick-and-dirty spin to finish it. I divided my fiber into thirds, more or less, and spun up some quick singles that were pretty uneven (mostly because I wasn't able to draft evenly with this fiber) and then plied them up in a very quick session yesterday afternoon. Here's the finished yarn: 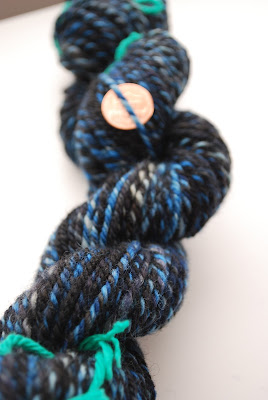 Given how uneven the singles were, I'm actually pleasantly surprised that the finished yarn looks as nice as it does. Sure, there are still some uneven parts, but overall, it's a pretty round, bouncy three ply. It's also super bulky (at about 6 wraps per inch) and a whopping 94 yards. I don't think I'll be rushing to spin this fiber again, but I will say that by the third bobbin I was starting to get the hang of it. I also managed to do pretty well with my singles control while plying; when I'd finished plying everything, I had about a yard of singles leftover, so I definitely maximized what I had.

I'm quite excited about what is likely to be next on the wheel, which I'm sure will be quite a pleasure to spin. Take a look at this beauty that arrived in Friday's mail: 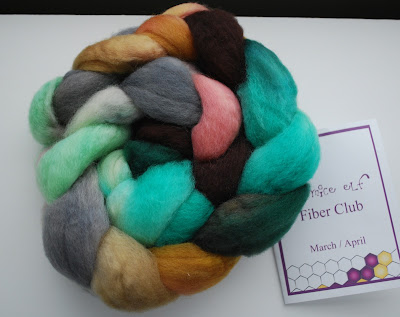 This is the March/April shipment for the Bee Mice Elf fiber club, a superwash BFL in a colorway called Hazy Days. I'm still undecided as to whether I'm going to spin this as a two ply or a three ply; for now, I'm just content to look at it and pet it!
Posted by Sarah at 3:30 PM