As promised, I have finished yarn. This is the most recent shipment from the Bee Mice Elf fiber club, a colorway called Hazy Days on superwash BFL. As a reminder, here's what the fiber looked like when it arrived: 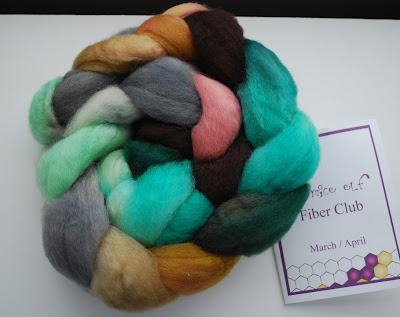 I didn't do anything special to the fiber beforehand; I just undid the braid, folded the length of top in half, and tore it apart at the fold point. I happened to make the split in the middle of a stretch of one color, so I spun one half starting at the split and the other half ending with it to try to avoid having that color plied with itself. Frankly, I was a little surprised at how often this color matching I was trying to avoid happened serendipitously, as I was expecting much more barberpoling. 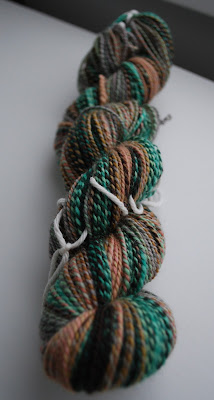 The skein looks to be about sportweight and is 196 yards. I think I might have gotten better yardage had I not put quite so much plying twist in. I generally like a lot of twist in my yarns and regularly have a twisty skein when I pull it off the niddy noddy, but most of the time the twist evens out in the wash. Not so this time. In fact, if you look closely, you can see a little corkscrew coming off the back of the right side of the skein in the photo above. I could run it back through the wheel to take out some twist, but realistically I'm unlikely to do that (I'm too lazy to ball it up, run it through the wheel, reskein, and rewash when I could just move on to the next thing).

Speaking of the next thing, it's already on the wheel. This is the rest of the Crown Mountain Farms corriedale pencil roving I used for my experimental sock yarn. I'm spinning it into a 2x2 cabled yarn, so I'm spinning an ounce at a time. 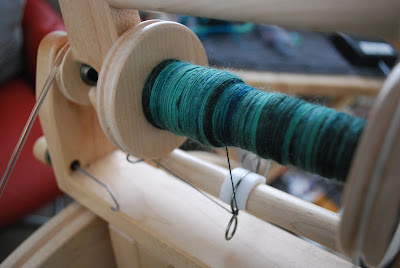 While I've gotten better at spinning thicker singles and yarns more recently, it's nice to know that I can still go back to my default superthin singles. My fingers know how to do it so well that I was able to do everything you see on this bobbin last night while watching a (subtitled) foreign film!
Posted by Sarah at 4:38 PM