In Which a Lightbulb Goes Off

I promised I would give a recounting of my lace shawl design class with Kirsten Kapur, and I don't want to disappoint.

In a word, the class was fantastic. I didn't expect three hours to fly by as quickly as they did, but I think all of us in the class were surprised when we realized we'd reached the end. I think that's the mark of a great class.

The purpose of the class was to explain how to use the basic construction of a top-down triangle shawl and a lace stitch pattern to create our own shawl design. Kirsten started us off with a basic stitch pattern, which we first had to chart from written instructions. They she explain to us how to embed that stitch pattern into the chart for a top-down triangle, including how to make adjustments so that it would be centered. Once we got the hang of that, we all pulled out our stitch dictionaries to find a stitch pattern we wanted to try and started to chart it (using positively enormous 11x17 graph paper!). As soon as we had enough of the chart filled out, we could pull out yarn and needles and begin swatching.

Although I've since realized that I made a little bit of an error in my chart and it could use some readjusting, I was quite excited to see it work out in my swatch: 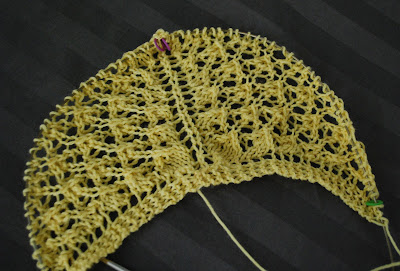 It's clear to me that this yarn isn't cutting it for this stitch pattern (it's Cascade Heritage Sock that I had leftover from a pair of socks I made for Rainbow and was the easiest thing to grab because it was accessible and already wound), so I'll be starting over with something better, but considering how I usually need to work through something to understand it, this swatch was invaluable.

The real revelation in this class came from understanding how to balance the stitch pattern in the chart. I'm still working on figuring out when I've reached the end of the chart (and I haven't even begun to try to transition to another stitch pattern), but I feel like I'm well on my way. Kirsten gave us a great handout that I need to sit down and read through in detail and recommended a number of resources.

As much fun as the class was, the afternoon was arguably even more fun. Apparently the class that was scheduled for the afternoon didn't have enough people sign up, so it was cancelled. Instead, Kirsten pulled out all the samples she'd brought and spread them around the shop, and then we all sat down and knit together. It was a bit surreal to be sitting and chatting (as I normally do on a Saturday afternoon) with a big-time knitwear designer, but she couldn't have been more down-to-earth and nice. If you have a chance to take a class with her, do it!
Posted by Sarah at 6:15 PM