I love fast spins. My default yarn is not fast, so it's always a thrill to me when I can manage to spin something thick (relatively speaking) and it takes only a fraction of the time.

My most recent yarn took me about a week, though that's a bit of an overstatement because I didn't actually spin every day of that week. It was probably a total of four spinning sessions, so maybe 6 hours or so overall. I didn't overthink it, which was probably the key.

I started with 4 oz. of Falkland from Gwen Erin Natural Fibers that I'd picked up probably a year and a half ago; the colorway was called Blue Danube. Rainbow selected this from my fiber stash to become a hat for her (incidentally, the lost hat it was intended to replace has since turned up, so I might end up keeping this for myself or saving it for next winter). 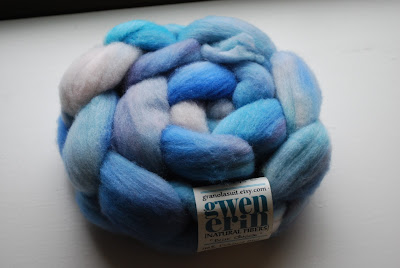 I split this in half and then split one half in half again to do another fractal spin, though I don't think it's as obvious as the last time I did it because there is so little variation in the colors in the fiber.

I ended up with about 161 yards of springy, bouncy two ply that looks to be mostly Aran/bulky. That's a bit thicker than I was aiming for, but I love how the yarn turned out so much that I can't complain. Take a look at this sexy twist: 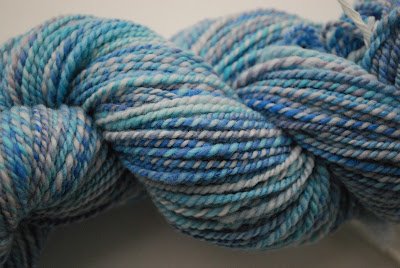 To give you an idea of how much spring is in this skein, I will tell you that my niddy noddy is two yards (72 inches) around, but after the skein dried, it measured only 52 inches around. Boing!

I was watching last week's Masterpiece Classic episode on my computer while I plied last night and finished the skein before the episode, so I pulled out something else to spin. I decided to start the Crown Mountain Farms mystery fiber that arrived a couple of weeks ago. My first clue about the state of this fiber should have been when I pulled about the bundle to divide it into thirds: Rather than being in one long length of top or roving, I had at least three pieces of differing lengths. It took a bit of time, but I got it divided more or less evenly. Then I sat down to spin the first bit -- and I must say that I was really disappointed. The fiber looked so beautiful in the bundle, but when I tried to spin it, it was a bit of a disaster. I tried to spin it using my usual worsted style, but it wouldn't draft evenly (I'd pull out clumps at a time). Then I tried a modified long draw, and it would work for a couple of minutes before it would fall apart. 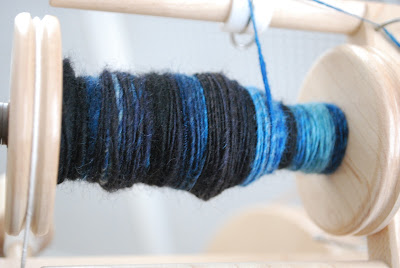 I know it's a little hard to tell because of the color of the fiber, but the singles you see here are wildly inconsistent. I'm not happy with this fiber at all, but I'm going to do my best to finish spinning it -- as quickly as possible. I'm sure the finished yarn will be better than the singles, but I'm still a bit annoyed. This is not at all characteristic of the fiber I usually get from CMF, and I know that there was some concern about the quality of the fiber that kept it from being shipped out. When I'm done with this, I'm going to need to pull out some of the really good fiber I've been hoarding as a palate cleanser!
Posted by Sarah at 5:03 PM