I have a confession to make: I've barely touched my Vitamin D since my last post.

There's a good reason for this, I promise, and it has nothing to do with the sweater or my interest in it. On Tuesday, I got a movie in the mail from Netflix that I knew would not appeal to the Mister at all (Mao's Last Dancer, if you're interested -- it has ballet and subtitles, so that's a double whammy as far as he's concerned). That meant that I'd be watching it on my laptop with my headphones, and as my laptop is usually set up next to my spinning wheels, that meant sitting in my spinning chair. Now, I suppose I could have knit there if I really wanted to, but usually when I watch something on my laptop it's when I'm spinning. And I thought it would be a good opportunity to get through some of that fiber that wasn't spinning up so well. I was able to finish up the first bobbin's worth and make a good start on the second. I didn't get to start the movie early enough on Tuesday night to watch it all before bed, so I finished it up last night (and got to my third bobbin in the process). 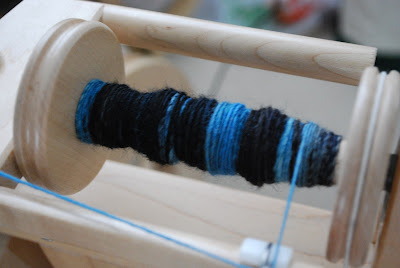 The movie was good and I'm happy with the spinning progress I made, but I didn't sit down to work on my Vitamin D until after 9 last night. Since you saw it last, I've added two more straight rows and the first radial increase row for the body. I will show it to you again when it looks significantly different; I'm hoping to put in a lot of time on it this weekend.

I did, however, finish a sock! 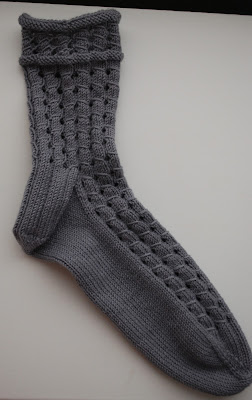 This is the first Rubus suberectus sock; I finished up the toe at lunchtime today (though unfortunately I completely forgot to put the second ball of yarn in my bag so I couldn't cast on for the next one). Because of my crazy row gauge, I did have to modify the toe. I started at 1.5" less than the total length and worked the decreases every other row until I got to 18 stitches. I also worked one more row of the pattern before starting the toe (the pattern says to start it after completing a pattern repeat) because I didn't want to do the first instep decreases using a yarnover. I did something similar on the leg before starting the heel flap.

This sock took me a decent amount of time to knit considering how quickly I've knit some in the past, but now that this one is done I've got the stitch pattern pretty much memorized, and I think the second one will go a lot faster. I've really enjoyed the pattern and have even preordered The Knitter's Curiosity Cabinet, Volume II (there's a pretty good deal on the print book plus digital edition if you order right now -- you get a couple of free individual patterns, too!). I may never have time to knit all the patterns in these books that I want to, but they sure are beautiful to look at!
Posted by Sarah at 5:50 PM