Bind Off One, Cast On Two

It's a sunny but noisy morning here in Pittsburgh; I had to finish up my coffee faster than I'd planned because the roofers were creating such a racket over my head. They have finished up the shingles on the back side of the roof, but this morning they are starting to replace the roof on the addition that was put on the back of the house sometime in the '80s. I am hoping it doesn't take too long to do that because it's not a very big roof -- at least we're supposed to have another dry week, so the weather will be amenable to roofing work!

Although I did not do much spinning over the weekend, I did do a fair amount of knitting. First, I finished up a pair of socks for the charity pile that had been on the needles for quite a while: 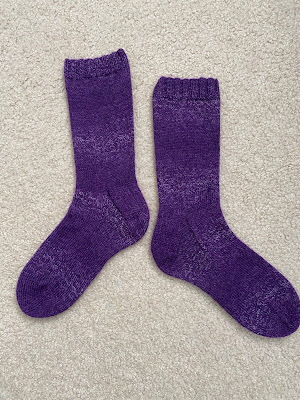 These were knit in Trekking XXL, color 119, that I bought years ago when a local yarn shop was closing and everything was on clearance. I'm sure I got a good deal on it, but there is no price tag on the skein, so I have no idea what I spent. I used a US 1/2.25 mm needle and worked my basic sock recipe over 64 stitches; to keep things simple for me, I made them to fit my feet. Even though I worked long legs (7 inches) and the feet are about 9.5 inches long, I still used only about 308 yards, so there's a good amount of yarn that's been added to the scrap bag.

Finishing these socks meant no active projects on the needles (there's still one hibernating WIP, but I'm not paying it much attention at the moment), so I cast on not one but two new projects. First, socks for my brother, who only recently mentioned that he'd wear hand-knit socks. 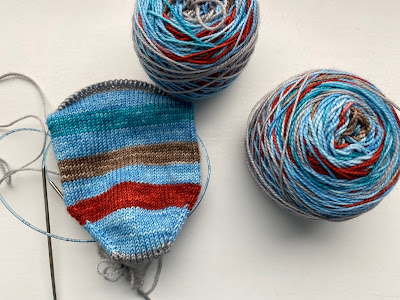 He has large feet -- 9 inches around and 10.75 inches long -- so even though I typically prefer to knit my socks cuff down, I decided that toe up was the best plan for him to make the yarn go as far as it can. I wound the yarn, which is Fibernymph Dye Works Bounce in the colorway Gettin' Crabby (it was the special colorway for Needles Up at MDSW in 2019), and then weighed it so that I could divide it in half more or less evenly, and I'll just knit until I'm out of yarn.

I also cast on for my Threirmuir, though my progress on that is much less impressive: 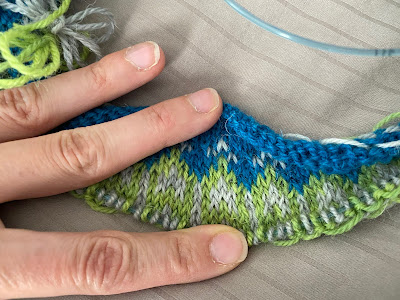 I hope whatever you have planned for today, it's filled with sunshine and less noise than I have in my neck of the woods!