Good morning from a very dark and rainy Western Pennsylvania! We seem to be stuck in a very wet system here; this is the third day in a row we've had soaking rain for most of the day. It may be better than snow, but it doesn't help the roofing project move along.

It is Wednesday, which means it's time for my weekly check-in with Kat and the Unravelers. Since finishing my Aldous, I haven't done a ton of knitting (mainly because I've been trying to finish the spinning for Rainbow's tallit project). But I did finally cast on a new shawl design: 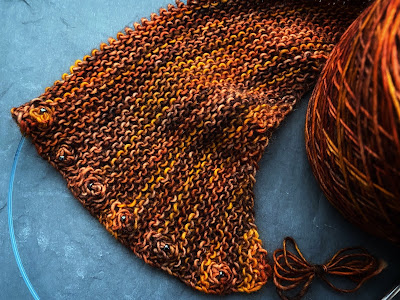 I am using yarn that I purchased at Indie Untangled at my very first Rhinebeck (hooray for stash!) as well as some seed beads for a little bit of bling. I'm hoping to get this pattern out sometime later this month, so once the current spinning project is done, I need to focus on this.

While knitting hasn't been that plentiful here, the reading has been very good lately. I have finished four books since this time last week.

I know that Before We Were Yours came out several years ago and many of you have already read it, but I hadn't gotten around to it yet. I have a list of books on my Libby app that I've tagged "to read," and when I'm between holds, I check out that list and see what's available. It was this book's turn last week. I found it to be an okay read, something I'd likely read while on vacation and that I might get as a hand-me-down from my mother. I enjoyed the storyline set in the past more than the present-day plot, which I found to be both unrealistic and entirely predictable. I wouldn't call it a wasted read, because it did entertain me and I did want to find out how the story ended, but it didn't blow me away, either. I gave it 3 stars.

My next choice was much more entertaining. One of my all-time favorite books is Jane Eyre, so I was really intrigued by the idea of a modern-day take on the classic. The Wife Upstairs, though, isn't really a retelling as much as it is a reimagining -- and it's great fun. In Hawkins' version of events, Jane is a young 20-something who has aged out of the foster care system and is working as a dog walker in an upscale Southern housing development when she meets and falls for the mysterious Eddie Rochester, whose wife disappeared and is presumed dead. But is she? Everyone in this book is suspicious and has secrets, and I couldn't wait to see how it ended. It kept me guessing and in actual suspense. I gave it 4 stars. I especially enjoyed how the author reworked some famous lines from the original!

Lately I've been spending a lot of my walking time listening to the Novel Pairings podcast (I've gotten hooked on it after listening thanks to Mary's recommendation), and Passing is a classic that the hosts have mentioned frequently. This short book is a kind of earlier version of The Vanishing Half. Set during the Harlem Renaissance, it tells the story of two women, Irene and Clare, who knew each other as children and reconnect years later as adults. Both are Black but light skinned and make different decisions about whether or not to pass as white. I did enjoy the book, but I think I could have gotten more out of it had I read it in the context of a class; I think it's a novel that would benefit from a good discussion. I gave it 3 stars.

Finally, just before bed last night, I finished Salvage the Bones. I read Jesmyn Ward's more recent Sing, Unburied, Sing back in 2018 and found it to be really depressing and troubling, but Mary had mentioned to me that she thought this was the better book. Early on, I thought I was in for more sadness -- and yes, you know that this is going to be a sad book because it's about a poor Black family in the days leading up to and during Hurricane Katrina. But it's also beautifully written and does such a masterful job of showing the love in this family, how they take such good care of each other despite having so little and having lost so much. I cried at the end. I gave it 4 stars (but really it's closer to 4.5).

I'm ready to start a new book today, but I'm also thinking ahead to Summer Book Bingo! I have my card and printed out a copy so I can start jotting down ideas for many of the categories. 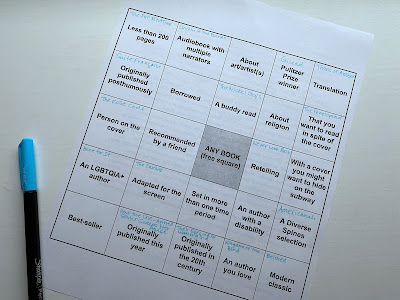 I'm using some of my library holds and some titles on my Libby "to read" list to fill in some boxes, and I'm also planning some rereads of books I already own. Some of the boxes that don't yet have anything in them will be easy to fill (Best seller, Set in more than one time period, Borrowed), but some are a little trickier (Author with a disability, About religion, About art/artists). The hardest part, of course, is not starting anything yet! Technically books only need to be finished to count for bingo, so I could start them earlier, but I'm not the type of reader who can start a book now and wait to finish it.

Will you be joining us for bingo this summer? Are there titles you are looking forward to reading? Any suggestions for me for those tricky-to-fill categories?