WIPs and What's Next

Good morning from the noisy house -- the roofers are here for the second day in a row, doing their very best to make the house vibrate! That banging can get annoying, but after last week, when they only managed a few hours of work due to all the rain we got, I am happy to have them here. They've even got a few extra workers on the crew in an effort to make up for lost time, so we'll see how much progress they make this week.

I have been plodding away at some WIPs during my knitting time. First, there's my shawl sample, which was grown considerably since last you saw it: 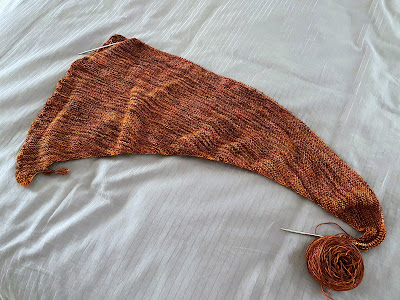 Because I'm basically knitting until I run out of yarn, it's hard to know exactly how much I've completed at this point. But I just weighed what's left of the ball, and it's 43 g (I started with 127 g, which was more than the advertised skein weight of 114 g). So I'm getting closer. Soon I'll need to start weighing after each pattern repeat so I can get a sense of how much is needed for each. I am writing the pattern in such a way that you can use any skein of yarn, but I'd like to give a general guideline of how much you should leave to finish it off.

I've also been putting in a round here and there on a pair of charity socks. I finished the first sock and started the second over the weekend:

A stockinette sock is perfect meeting knitting, and I have two of them in the next two days (an office staff meeting this afternoon and a synagogue committee meeting tomorrow evening), so that second sock will get a bit more attention.

While I work on these WIPs, I'm also planning my next cast on. Yesterday while I read a library book, I knit up a swatch for Threipmuir. I've been planning to knit this sweater for a while, and I even bought the yarn for it last year: 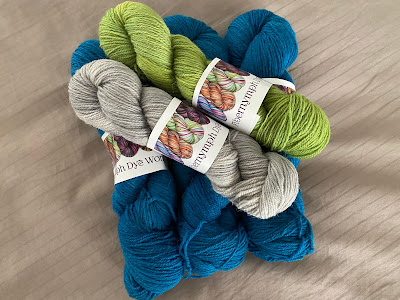 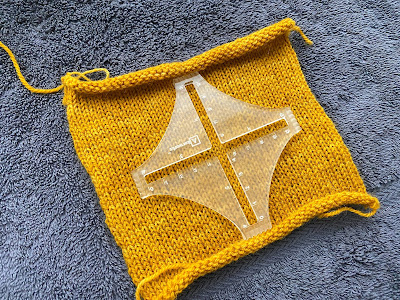 There is a way to do a faux swatch in the round without having to cut the yarn or the fabric (see this video for a demonstration), but I find that it doesn't always give an accurate representation of gauge. If I'm going to knit a sweater in fingering weight yarn, I darn sure want to make sure that I get gauge, and I know that my gauge is slightly tighter when I work in the round than when I work flat, so working a flat gauge swatch wouldn't do me any favors -- and if you're looking for a more detailed explanation for why you should swatch in the same way you'll knit the item, my friend Kristen has you covered. So I cast on 40 stitches, joined in the round, and knit a tube. After I bound off, I did what was effectually the same as a couple of lines of single crochet (but I did them by picking up stitches and then immediately binding off) and then cut down the middle. [If anyone is interested in this technique, by the way, let me know and I'll do a photo tutorial.] This way, I knew that I'd get a true measurement of my gauge knitting in the round. I soaked my swatch and let it dry overnight and then measured it this morning. And I'm happy to report that my gauge is pretty much spot on at 24 stitches and 34 rounds over 4 inches. So perhaps later today I'll be winding up my yarn and using it as motivation to finish up the shawl. All the exciting stuff in this sweater happens at the beginning, so I'm thinking all that body stockinette would make for good knitting while I read for book bingo this summer!

Are you working on WIPs and using the prospect of new projects to motivate you to finish? Please tell me I'm not the only one who does this! See you back here tomorrow for a reading update!