Oops! I Did It Again

Remember how when I finished my last skein of handspun, I said I'd overestimated just how fine I needed to spin my singles? Well, it appears I am the proverbial old dog who can't learn new tricks. 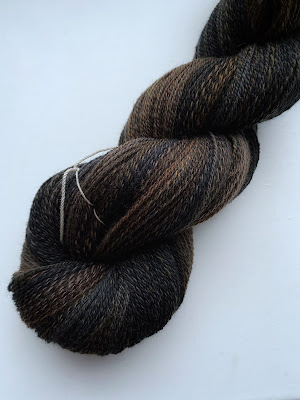 This is the Crown Mountain Farms Polwarth that I'd been spinning as the compliment to the really bright and colorful skein for Rainbow's bat mitzvah tallit. It was the most sedate fiber we found in my stash, at least of the stuff that was dyed, and I still have no recollection of why I bought it. Unlike the previous spin, this one had no silk in it, so you would have thought that it would have been a little more of a challenge to get a really fine yarn. But no: 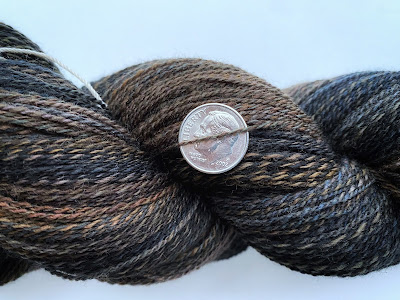 From 4 oz. of fiber, I have approximately 778 yards of two-ply heavy lace weight. I am still astonished by that number. And I'm also thankful I had my Super Skeiner when it came time to wind it off, because I think I would have damaged my shoulder had I had to do it using a niddy noddy and very likely would have lost count while winding (there were 459 wraps, in case you were wondering). I still need to dig out my Zoom Loom and weave up a little sample with the two yarns to get Rainbow's approval, but I think the skeins look really nice together: 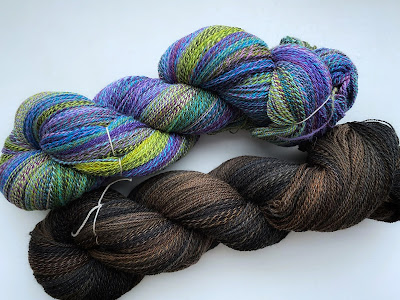 Because I am not a weaver, I'm not sure which yarn would be better for warp and which for weft, but I think the darker skein will tone down the colors in the other skein and give a colorful but muted fabric. And I think there's certainly enough yardage -- more than 1,400 yards in total!

Up next, I've started a project to spin for a sweater. Mary and I have decided to to a little knitalong together of Andrea Mowry's Shifty pullover. The pattern calls for Spincycle yarn, which is (in my opinion) absurdly expensive, most of all because I can spin yarn that looks pretty much the same. So that is what I'm going to do. I have started with my most recent Southern Cross Fibre club shipment, a colorway called Dark Ocean on gray Merino. I'm spinning a traditional three ply and started the first bobbin yesterday: 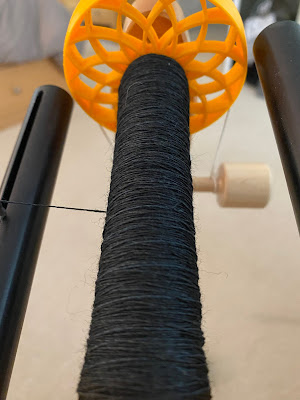 This colorway is a semisolid, so I just split the fiber into thirds, but for the other colorways, I'll be going for a Spincycle-eque look and dividing different colors or shades for different plies (much like I did with this skein). I am going to need quite a lot of yarn for this project, but I have quite a few colorways from SCF with shades of blue, so while it may take a while to get all the yarn spun up, it will be a good stash-busting project.

I hope those of you who are celebrating Mother's Day today have an enjoyable day. For those of you for whom this is a tough day, I send you love.