It can be risky to knit a wool sweater in April. This most recent April, more so than any I can remember, was a real roller coaster of a month in terms of weather. We had snow and we also had days that were downright hot. We toggled between heat and air conditioning several times. And while I don't usually pay much attention to the weather when I choose what to knit and am happy to knit wool sweaters in the summer, there is always a part of me that likes to be able to wear something when I finish it. I almost always expect that when I finish a sweater and it's not the middle of winter, I will automatically trigger a heat wave, and we did have some warmer weather last week right after this sweater came off the needles. But then we had a cold front come through last Thursday night, and as a result, I got to wear my new sweater not once but twice! 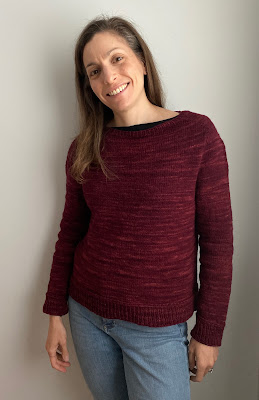 This was my second Isabell Kraemer sweater and my third in Buoy DK -- it's really become my favorite sweater yarn. The blend of wools is really unusual, and while some people might find it a bit scratchy, I think it softens up really nicely as you wear it, and it's light and warm but also sturdy feeling. I am surprised that I used as little as I did, about 100 yards less than the pattern called for, but I have no complaints on that front!

The pattern itself was really well written, and it used a new-to-me construction: a top-down saddle shoulder. It begins with the collar and some short-row shaping so that the back of the neck sits higher than the front. The sweater is entirely in stockinette and seamless, though there are faux seams (in the form of columns of single purl stitches) to give the illusion of a seamed garment and one down the center of the back, just because. 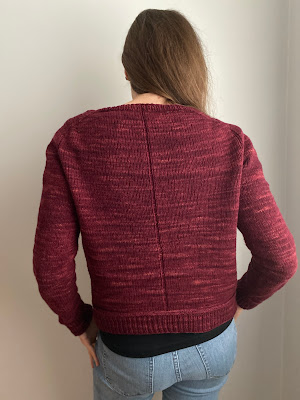 While the shoulder construction was fun to do because it was new to me, I'm not sure it fits me as well as some other methods. I know it looks just fine in these shots, but if I lift my arms, the shoulder area looks a bit constricted to me. There's enough positive ease that it doesn't cause an issue in the actual fit, but I don't love the look of it. Still, it's good to try something new.

Speaking of which, this pattern gave me a chance to try another new technique -- a lateral braid: 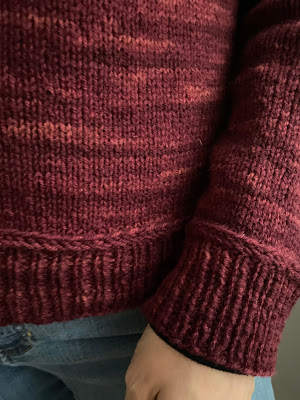 This decorative element is worked just above the ribbing on both the body and the sleeves. It's actually much easier than you might think, though it's very fiddly. Essentially you are using two strands of yarn and twisting them between every stitch. It's a two-round process, so you twist them one way on the first round and the opposite way on the second. Theoretically the second round should undo all the tangle of the first, but I couldn't deal with it on the body with so many stitches on the needles and stopped to untangle frequently. For the sleeves, I left the tangle alone and did have success with the second round (mostly) undoing the mess of the first.

All in all, I am very pleased with this sweater and can highly recommend the pattern. I'm sure there will be more Isabell Kraemer sweaters in my future, though I'm hoping to have to wait a while before it's chilly enough to need one again!