The good news is that I've finished a skein of handspun, the first for my Southern Cross Fibre sweater spin. The bad news is that I cannot seem to get my camera to correctly capture the deep, dark blue that it is in real life. The colorway is Dark Ocean, and it's just that -- a deep, moody blue verging on teal. It makes me think of the colors you see in the ocean in Renaissance paintings of ships at sea in the middle of a violent storm, like this: 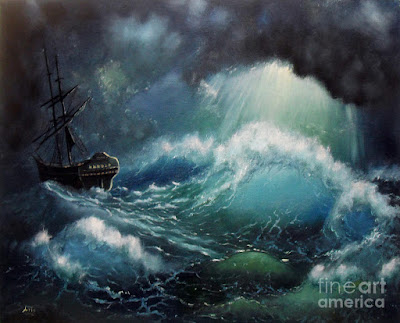 I've tried to edit the colors to get them to be more accurate in the photo, but I still don't really know what I'm doing with photo editing, so trust me when I say this is darker and really stunning in person. 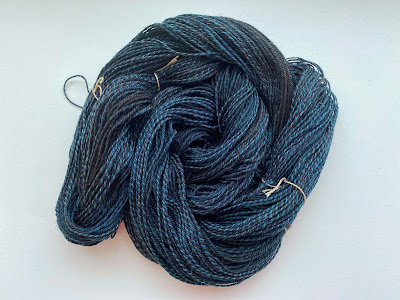 The next skein to be spun will be from this organic superfine merino from November 2018. The colorway is A New Hope: 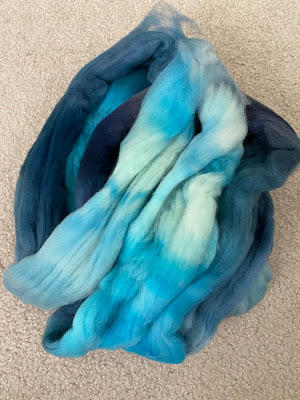 I plan to pull this apart so that the light and dark areas are separated as much as possible to get more of the look I'm going for.

I also got a pretty amazing surprise this week when my April club shipment arrived. I knew it was on its way because I got an email from Australia Post telling me so, but because shipments now come by boat and arrive in the United States in San Francisco (rather than the route by plane through New York, as they did in the Before Times), they typically take several weeks to arrive. So you could have knocked me over with a feather when this took a mere eight days to arrive here! 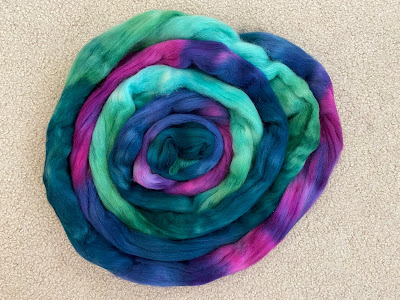 This colorway is called Kingfisher, and it's on Corriedale wool. I absolutely love these colors, and I'm actually wondering if they might fit in with the blues and purples I've already selected for my sweater spin. Something to ponder!