I have not very much spinning to share this evening, mainly because I often find myself doing more spinning on the weekends and this weekend we were actually fairly busy! Yesterday morning, we watched my cousin's son's bar mitzvah, which was live-streamed from Chicago. He was originally supposed to have it a year ago, and they postponed it for a year hoping that we'd all be able to gather in person this year. Sadly that was not the case, though immediate family was there at the synagogue, so it was better than it would have been last May in that respect. Then today we were able to get together with some friends who we had not seen in person since late last summer other than a brief drive-by visit. They have a 1-year-old daughter who really hasn't seen many people other than her parents for her entire life, so I guess we provided a bit of novelty to her.

All of that is to say that there was more time spent socializing than spinning this weekend -- but that's okay! I did get most of a second bobbin of dark blue singles spun (the fluff you see here is the fiber still to be spun on this bobbin): 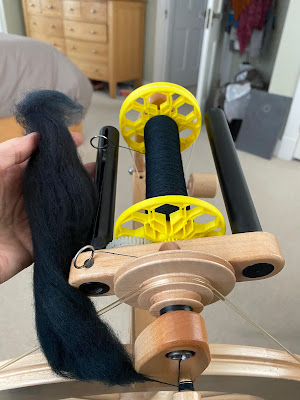 I hope to have the rest of this spun by tomorrow so I can move on to the third and final bobbin. I am anxious to ply this first skein to get a rough idea of yardage so I know approximately how many skeins I might need for the sweater.

In the meantime, I've got some more motivation to finish this sweater spin in the form of the most recent Southern Cross Fibre club shipment, which arrived earlier last week. It may seem like they're coming more frequently than once a month lately, but that's partly because David had a bit of a backlog because he had some trouble getting wool to dye due to pandemic shortages and also because shipping times have only recently started to get more normal. Anyway, this is March's shipment, a colorway called Autumn's Last Breath on Rambouillet top: 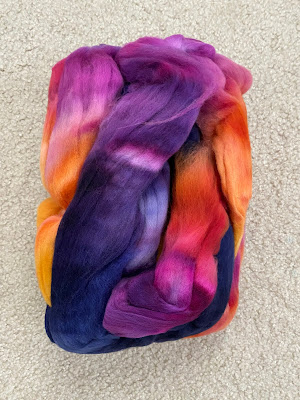 I really love this one, but I couldn't figure out why this particular color combination looked so familiar. Then, just a day or so ago, it hit me: 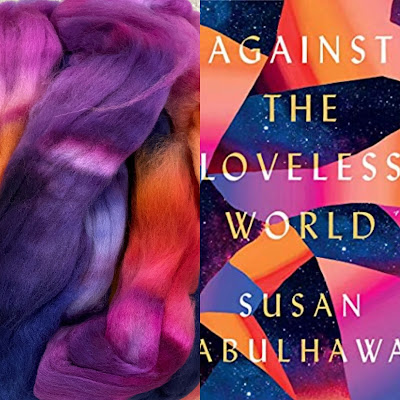 I guess if I wanted to spin fiber that reminded me of book covers, this one would work perfectly! It may not be as much fun as painting your nails to match the cover of a book you're reading (look at Mary's Monday photos!), but it is fun to combine two of my favorite pastimes.