It's Thursday, though it's my Friday because I am off tomorrow, and if that isn't reason enough to be happy, I thought I'd link up with Carole and share three more things that are bringing me joy today.

1. Our lilac bushes are blooming (and they smell amazing!) 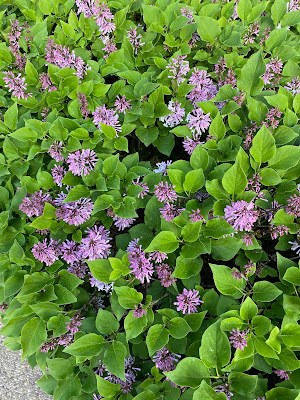 These bushes are along our driveway, and I normally pass them a lot, but the current stage of the roof project means that there is scaffolding along the back of the house and a dumpster in the driveway, both of which prevent us from getting in and out through the back door. On top of that, there's usually a roofer's truck parked in front of the dumpster during the day, so when I leave the house, I've been missing them altogether. Today, though, I had to take Rainbow to school while the Mister took my car to the dealer for its annual inspection, and I got to get up close and personal with the bushes. Good thing, too, or I would have missed these fragrant blooms! I have never seen as many flowers on them as I have this year (they only started flowering at all a few years ago), so I can only imagine how amazing they will be in years to come.

2. Thanks to vaccines, we were able to safely have dinner with all our siblings last night.
My brother- and sister-in-law hosted us for a Cinco de Mayo-themed dinner, and that meant that I got to see and squish this cutie: 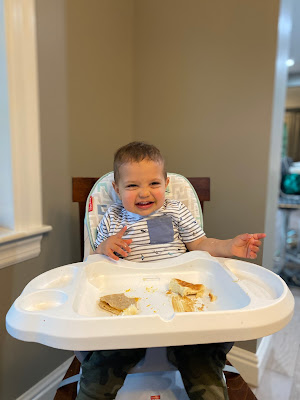 He's 19 months old now and is running around and talking up a storm. I hadn't seen him in person since sometime last year, I think (we did a few outside meals when the weather was good last year), though we've video chatted with him plenty of times and they've been showing him our pictures so he doesn't forget us. He can say all our names, more or less (I'm "Sadah" -- R's are hard!), and he's got the stubborn toddler persona down. He's going to be a handful, especially because of item number 3 ...

3. I'm going to be an aunt again!
Baby #2 for my brother- and sister-in-law is due around Thanksgiving! They'll be finding out the sex (my sister-in-law is convinced it'll be another boy), so I will have some guidance as far as my knitting is concerned. I'll also be putting some stuff on the list for my nephew, because I know that when his sibling comes along he's not going to be happy about not getting all his mama's attention!

I hope your Thursday is full of reasons to smile! See you back here on Sunday (spoiler alert: I'll have a finished skein of handspun to share!).

Email ThisBlogThis!Share to TwitterShare to FacebookShare to Pinterest
Labels: Three on Thursday