I'm honestly a bit surprised that it's already Wednesday, probably because for long stretches yesterday I was convinced that it was still Monday, but it is, so it's time to link up with Kat and the Unravelers yet again. 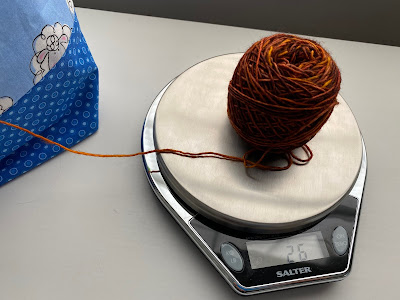 My shawl doesn't look much different from yesterday's photo, but the number on the scale is quickly shrinking, so the end is in sight! I will be focusing on getting it finished before I cast on for a new sweater.

Reading has been fairly good this week. I've added another three books to my finished pile:

I'd had The Essex Serpent tagged "to read" on my Libby app for a while and finally saw it had no wait when I was ready to start something new. Based on the Goodreads reviews for this book, it appears to be one you either love or hate. Personally, I loved it. It hit so many sweet spots for me: historical fiction with a strong female protagonist and gorgeous writing. It's hard to explain what it's about, but I guess if I had to, I'd say it's about a woman, recently widowed and with an unusual teenage son, whose intellectual sensibilities are ahead of her time (the novel is set in the late 1900s). As she explores her newfound freedom, she learns of rumors of a serpent-like creature that is killing people and animals. She also meets and is strangely drawn to a local clergyman who is trying to convince his parishioners that the serpent doesn't exist and that it isn't something sent to punish them for their sins. It's a novel about the tension between faith and reason, about the role of women in society, about love and relationships. I recognize it's not going to be for everyone, but it was a completely immersive book for me. I gave it 5 stars.

And now for something completely different! I've mentioned that I've been listening a lot to the Novel Pairings podcast recently, and Elizabeth Acevedo is one author that the hosts regularly rave about. So I decided to borrow the audiobook of her most recent book, Clap When You Land. This is a novel told in verse from the perspectives of two teenage half-sisters, one in New York and one in the Dominican Republic, who only learn of each other's existence when their father is killed in a plane crash. It's a really beautiful, emotional novel, and it was a real treat to listen to (Acevedo narrates the part of the American sister). I gave it 4 stars.

Another Novel Pairings recommendation was The Other Typist, which, if I remember correctly, was chosen as a pairing for The Great Gatsby. It's set in the mid-1920s, in the middle of Prohibition, and is told by Rose, a typist in a New York City police precinct whose life is dramatically changed when Odalie, a glamorous and mysterious young woman, is hired as another typist. I'll admit that this book turned into a bit of a slog toward the middle because I could see where the story was heading. While I was mostly right, there was a major twist at the very end that left me questioning everything. I gave it 3 stars.

Currently I am reading Homeland Elegies, and just this morning I got a notice from the library that the audiobook of Four Hundred Souls was ready for me, so I'll be starting my listen on my walk this morning.

So, what are you working on and reading these days?