Ready for the Gymnastics

There are two more days (after today) left in the month of August, and I am determined to finish up one more skein of handspun by month's end so that it counts for Stash Dash. As of this morning, I have two bobbins of singles ready to be plied: 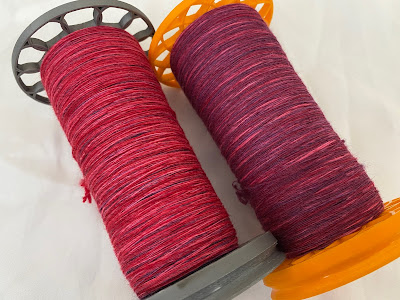 I tried to explain how I would be plying these last week, but it seems that few (if any) of you understood what I'd be trying to do. So here's a little photo illustration for you, with a bit more explanation. First, you have to understand that chain-plying is a way of creating a faux three-ply yarn. It look like a three ply, but it's actually all one strand that's just been folded back on itself and twisted. An easy way to understand it is to think of crochet chains, stretched out really big, with added twist. What I'm doing is taking it one step further to create a faux four ply. I'm still making those loops but with only one of the two strands; the other strand just hangs out next to the loop. And each time I make a new loop, I'll grab from a different bobbin. So if the first loop comes from the gray bobbin, the second will come from the orange bobbin, the third from the gray, the fourth from the orange, etc.

Here is what this looks like in some commercial yarn: 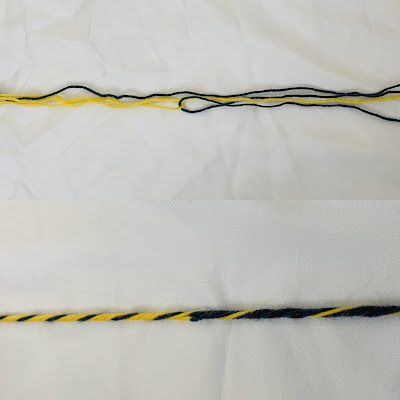 On the top are just the loops. I made the first loop (to the left-hand side) with the yellow, so it looks like there are three strands of yellow and one of the dark green. The second loop used the dark green, so it appears to be three strands of green and one of yellow. On the bottom half the photo, you can see what the loops look like when twist is added. If you click the photo to embiggen, you'll be able to see that the yarn has the appearance of having four plies, but it's really only two. And you can see that each section of the yarn is like the photo negative of the other. I don't think the yarn I'm about to ply will be quite that dramatic (because both bobbins contain singles from the same batch of fiber in the same colorway), but I expect that there will be sections where the shades in the two singles don't match and there's more of a contrast. I'm excited to see how it looks, and I'm determined to finish it by end of day on Tuesday, so I promise you'll get to see it next Sunday!