In Which I Cross a Big Item Off the List

It's not quite time for an official update on my 21 in 2021 list, but I can give you a little sneak peek by telling you that I'm crossing one large item off that list: I have knit a handspun sweater.

But before we get to the finished sweater, we need to go back in time to about two years ago, when I decided to deal with some of my overwhelming Southern Cross Fibre stash by doing a combo spin with eight club shipments. A combo spin is when you combine a number of different colors and/or fibers to make a larger project. Sometimes there's a strategy to it in term of color and sometimes there's not. In my case, I picked eight colorways from the club that looked like they'd play well together, divided each one up into about 16 smaller bundles, and then combined put all the bundles into a big bag. It looked like this: 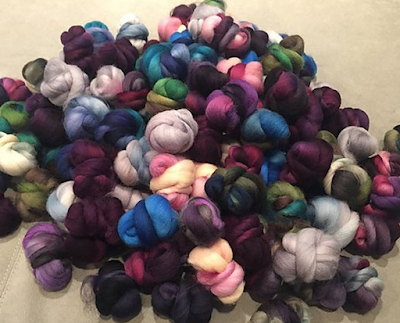 My spinning was completely random: I reached into the bag and pulled out a new little bundle when I needed one. The only management I did of colors, if you can even call it that, was to ensure that when I grabbed a new bit of fiber, it wasn't from the same colorway as the one I'd just finished spinning. I more or less filled six bobbins with singles: 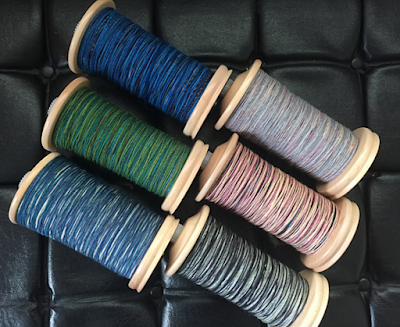 And then I plied them for three skeins of yarn (plus a much smaller fourth skein, which was chain-plied from the leftovers when I had run out of singles for the three-ply yarn): 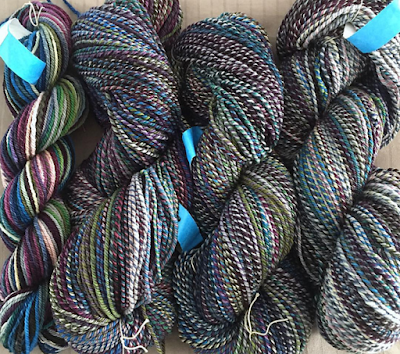 My estimate was that I had about 820-ish yards of the three ply plus about 107 yards in the chain-plied skein. The yarn was definitely dense and tightly plied, hence the rather low yardage. When I finally picked the Ramona Cardigan as my project for this yarn, it really looked like I'd be cutting it close, but I figured I could make the sleeves 3/4 length if I needed to, and I could always break into the chain-plied skein for the collar and button bands if I needed to. What happened, though, was akin to the Chanukah miracle, in which the oil that was only enough for one day burned for eight -- or, more realistically, my yardage was dramatically underestimated and/or the designer generously overestimated how much yarn was needed. 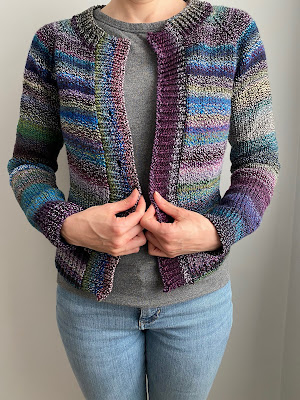 It's been a long time since I knit a sweater for myself in anything thicker than a worsted weight, and I think this is the first time I've ever knit a sweater using needles this large. That took some adjustment, but it was also extremely satisfying how quickly it went.

The pattern calls for 2-3 in./5-8 cm of positive ease, so I should have knit the next size up to get that, but I was worried about having enough yarn because this size called for 825 yards, pretty much exactly what I thought I had. So my cardigan only has minimal positive ease, but it's quite comfy that way. I know it looks like the fronts will have to be stretched a lot to actually button the sweater, but I think that's just an illusion from how I'm standing. I do like how it hangs with the front open, and in all honesty, that's how I'm likely to wear this most of the time anyway. 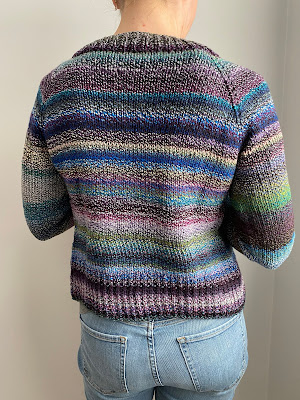 One of the things I love about knitting with handspun is that it always stripes when you spin dyed fiber, even when you think it's a solid (it's just more subtle in that case). The random nature of spinning also meant that I didn't have to worry about blending in a new skein when I joined it because the colors change so frequently even within one skein. I also didn't have to worry about trying to get the sleeves to match each other because there was no way to do it even if I had wanted to.

This sweater is a raglan worked in one piece from the top down. There's a garter stitch feature along the raglan line that's then picked up again for a faux seam at the sides under the underarm and then echoed in the broken rib at the bottom of the body. The sleeve cuffs, collar, and button bands are 1x1 rib. 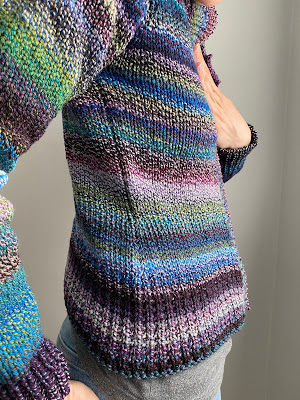 My only modifications to the pattern -- which, by the way, is extremely well written and easy to follow -- were to switch out the type of increases used (I prefer lifted increases rather than the m1, which uses the yarn running between stitches and thus sometimes distorts the existing stitches on either side) and to work the stitches at the edges of the button bands in garter to try to combat the curling that often results in the edges of the button bands not sitting even with the rest of the knitting.

I searched through my button collection, with Rainbow's help, but only came up with one button that was the right size and worked well with the colors, so I had to go online to find some. Ultimately I picked these buttons from this Etsy shop, which are actually shank buttons (I think that will actually work better given the thickness of the fabric): 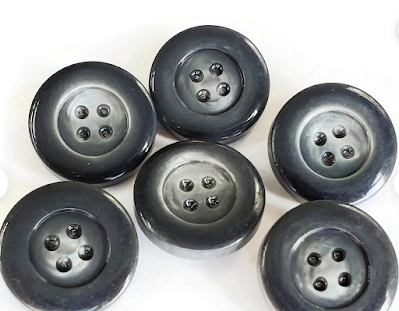 Overall, I couldn't be happier with how this turned out. It was a fun knit, and certainly the speed with which it knit up was extremely satisfying. I was hoping it would use up most, if not all, of the handspun, but there's still a good amount leftover! Perhaps it's a good reason to update my Etsy shop, which has been dormant for a long time, and see if someone else wants to play with the yarn that brought me so much pleasure. 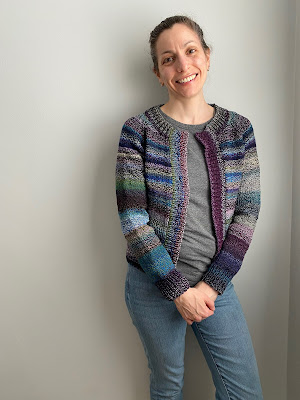